It’s Friday. I couldn’t resist. Plus, I haven’t had Sour Patch Kids in years. And sorting–in any form–is awesome for a million reasons.

And, it was the Back-to-School Picnic and Movie Night at Maddy’s school, so I knew we’d be outside and up later than normal.

My husband and I were out late last night watching Time For Three perform with the BSO at the Meyerhoff. Too fun.

It stopped raining, it finally cooled off, and it’s officially fall.

So, with all of these reasons to celebrate, I went a little sugary today with my kiddos.

I wrote the color names in upper case on one set of cards (for Owen), lower case on another set (for Maddy), and left the last one blank (for Cora).

Then I dumped a few handfuls of candy (marshmallows, Sour Patch Kids, Mike and Ike’s, and Juji fruits) on the lid of the egg carton. And I grabbed three sets of kid-friendly chopsticks. 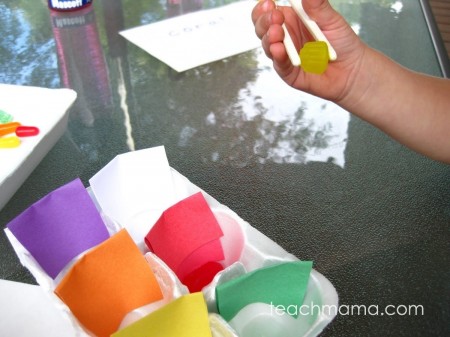 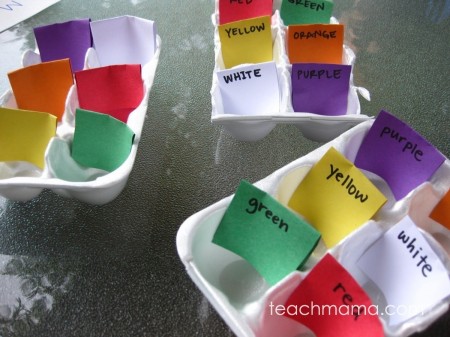 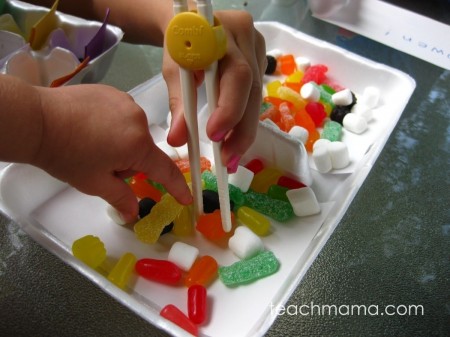 My little sorters. Of course the smallest is sneaking some. . .

Then I met Maddy, Owen, and Cora at the table, and I set their egg cartons, their chopsticks, and the big tray of candy in front of them.

I said, What do you think we’re going to do for our snack today?

And Maddy promptly picked up her chopsticks, started putting the red candy in the red section, the yellow in yellow, and said, We’re sorting. We do this in Kindergarten all the time, Mommy, of course I know. (Okay, then. . .) 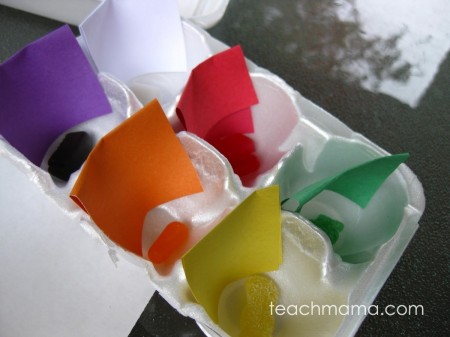 Yep, Maddy’s absolutely right. Everyone uses their chopsticks to pick up the candy–that’s the only rule. So start sorting!

I gave Maddy and Owen the challenge of trying to put five (for Maddy) and four (for Owen) candies in each section for their ages. With Cora, as she reached for candy, I’d say, Is that red or orange? What color are you looking for next? Is this one white or yellow? 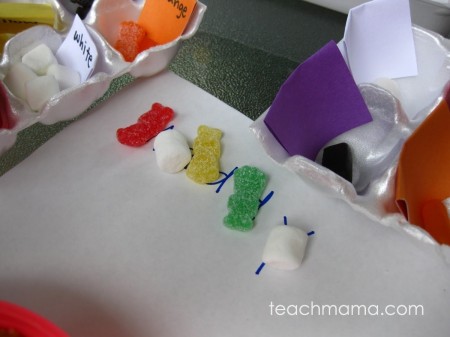 When they finished, I said, Okay, now cover each of the letters in your name with any candy you’d like, and those are the ones you can eat first. Of course, they gobbled them up, and the second time I asked if Maddy and Owen could do a pattern on their letters with colors or shapes.

It was far from healthy, but it was so fun.

The chopsticks actually do help them work on fine motor skills–any time they use them. The color sorting was more for Cora, since Maddy and Owen seem to be solid here, but reinforcing can always help.

Having them put one candy on each letter helps with one-to-one correspondence, and pattern-creating is a super-important early math skill.

Next time, I may:

Just a tiny bit of learning on a super-sweet Friday!