Norse Mythology 101: prep and background for reading Magnus Chase and the Gods of Asgard by Rick Riordan 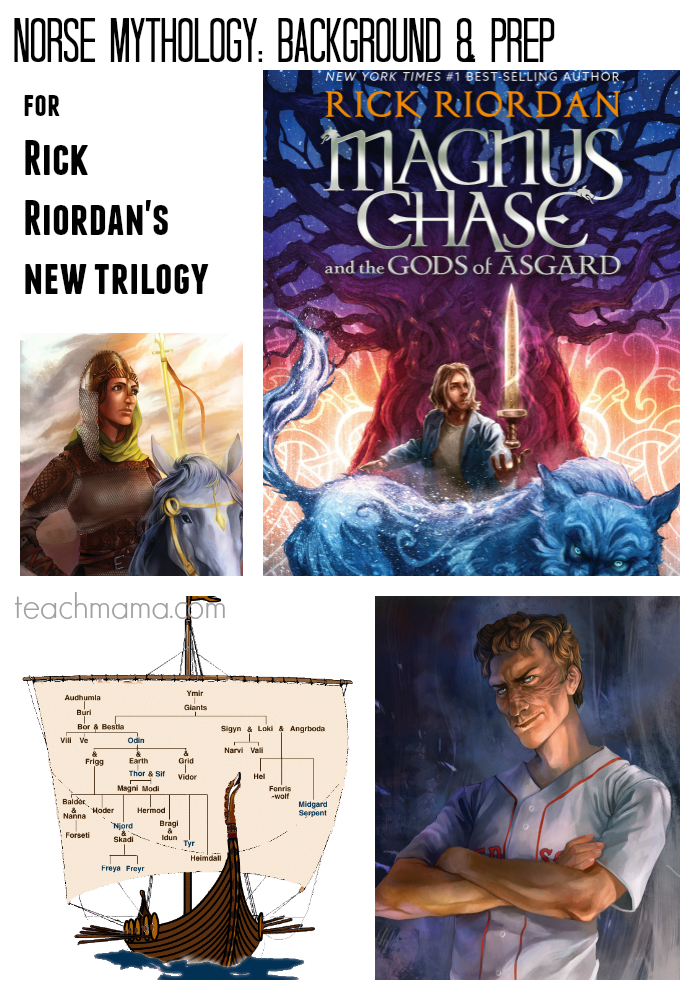 My kids seem to have a stronger understanding of Greek mythology thanks to their devouring of the Percy Jackson series.

And thanks to the amazing and incredible Greek Heroes and Greek Gods books, by Rick Riordan and illustrated by John Rocco which the kids absolutely adore.

But with Rick Riordan’s new trilogy coming out which is based on Norse mythology, I think my kids will be really confused.

Or maybe I’m not giving them enough credit.

Perhaps they’ll read, learn, and understand just fine without any outside help.

But as we unwrapped the advance copy of Magnus Chase and the Gods of Asgard this week, I thought, Oh my gosh. Norse mythology? What the whaaaaa?

So I thought I’d gather a few resources–quick ones that the kids can zip through on their own time–so that they get the most from their new book. And, maybe they’ll appreciate it more as they read it.

Norse Mythology 101–Prep and Background for Reading Magnus Chase and the Gods of Asgard by Rick Riordan:

I love this quick Prezi on Norse mythology vs Greek mythology. (It’s always smart to start with what we know, right?)

And this slideshare presentation on Norse Mythology is helpful, too:

Maybe your kids learn best by seeing it all mapped out:

The website that I grabbed this from is a little ad-heavy, so be careful: The Windows to the Universe, from the National Earth Science Teachers Association.

Now? The book: Magnus Chase and the Gods of Asgard by Rick Riordan: 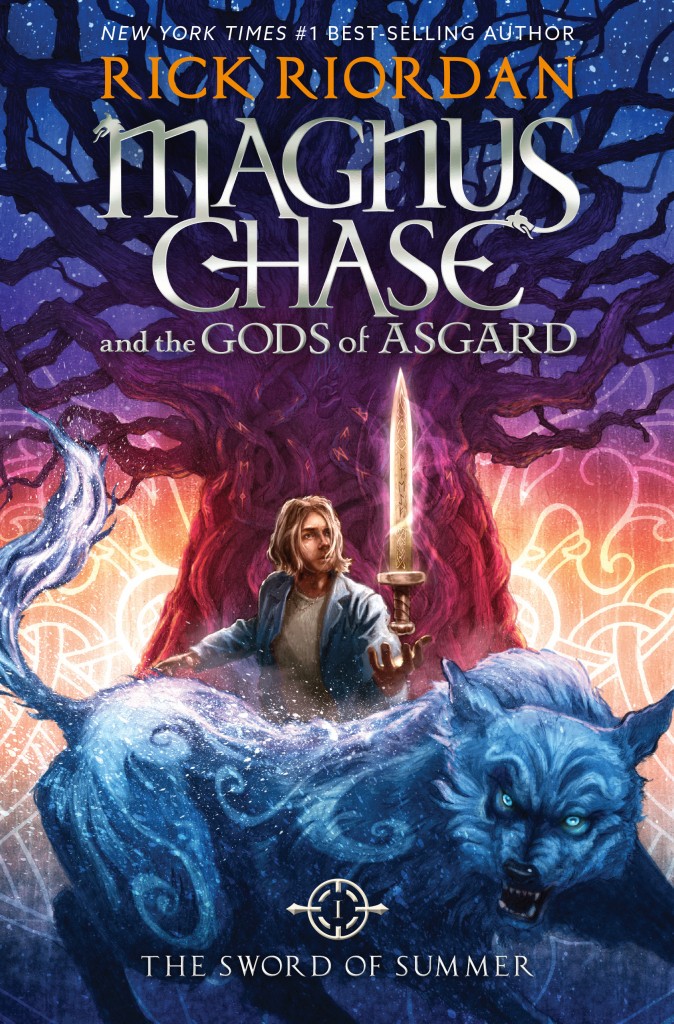 Here’s the info on the new book, straight from the publisher:

Magnus Chase has always been a troubled kid. Since his mother’s mysterious death, he’s lived alone on the streets of Boston, surviving by his wits, keeping one step ahead of the police and the truant officers. One day, he’s tracked down by an uncle he’s never met—a man his mother claimed was dangerous. His uncle tells him an impossible secret: Magnus is the son of a Norse god. The Viking myths are true. The gods of Asgard are preparing for war. Trolls, giants, and worse monsters are stirring for doomsday. To prevent Ragnarök, Magnus must search the Nine Worlds for a weapon that has been lost for thousands of years. When an attack by fire giants forces him to choose between his own safety and the lives of hundreds of innocents, Magnus makes a fatal decision. Sometimes, the only way to start a new life is to die . . .

Check out the book trailer:

And check out Rick Riordan reading from the first chapter: (eeeeeeeeee! you know I love authors!!)

Here are a few character cards from the new book: 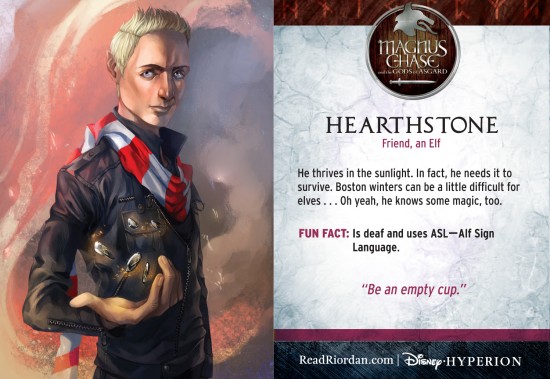 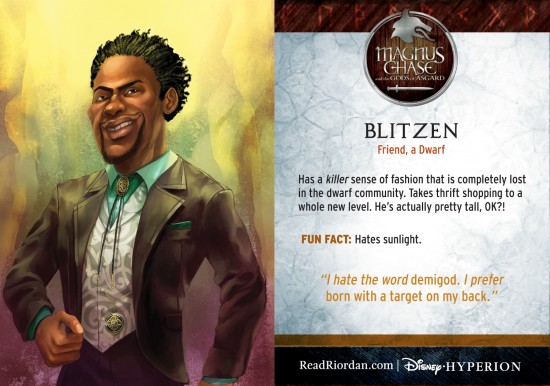 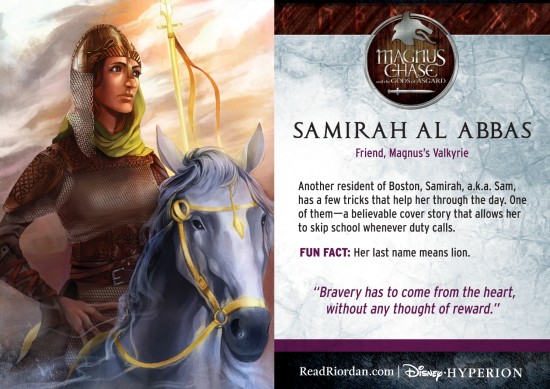 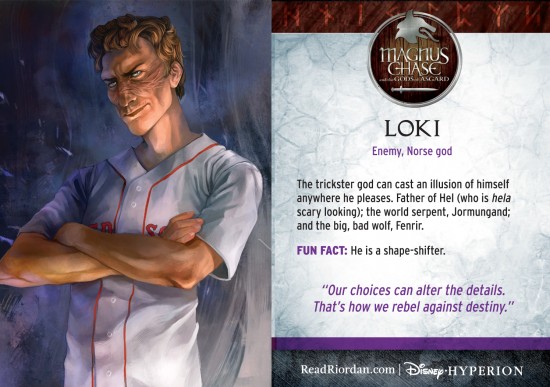 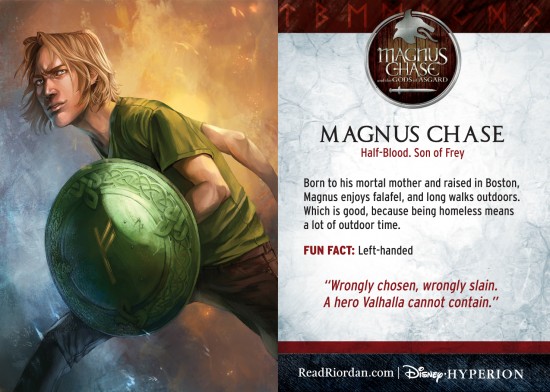 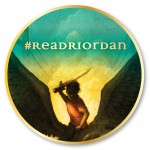 fyi: Huge and happy thanks to my friends at Disney-Hyperion for inviting me to be a part of the Percy Pack bloggers this year. It’s been an absolute pleasure! As always, my opinions are all my own, influenced only by my experience as a parent and educator.

littleBits: the perfect toy for curious, creative kids
Next Post: 8 things all kids must hear their parents say