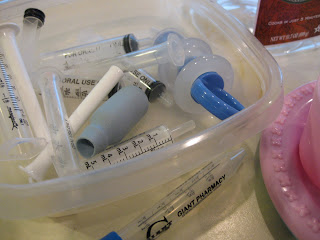 The rainy, grey day had us all feeling cranky, complainy, and just plain down.

So I brought out two big bins that were once filled with baby clothes (boo-hoo!) which are now empty because I gave them to a neighbor who really needed them (woo-hoo!).

I filled one with soapy water and one just with water and toys, and I crossed my fingers that the splashes would end up cleaning our way-too-dirty kitchen floor. (They didn’t. So it’s still dirty.)

Then I threw in some things that I knew would take a little bit of thinking in order for Maddy, Owen, and Cora to figure out how to use them.

Today, I brought them out because we needed a change from our Legos-puzzles-stamps-stickers-week, and my kids love to play in water. 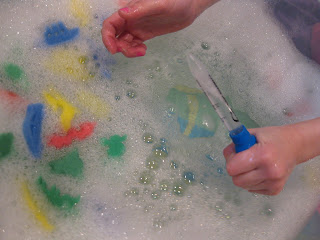 Maddy plays with the dropper.

I said, All right–let’s pretend it’s summertime and play in the water for a little before we head to church. I’ve got some of your sponge shapes in here, some Polly Pockets, and some cars.

And I have some things that you’ll need to put on your thinking caps to use. Let’s see who can figure out how to fill up this tiny cup (one of our plastic kids’ yogurt cups) using any of these things (the droppers and syringes).

They splashed around and played in the bubbles and pretty much ignored my question for a bit, but then they tried it. And tried. And tried some more. And finally, before they frustrated and everything got nutty, I said, Try to pull then push. And use two hands. 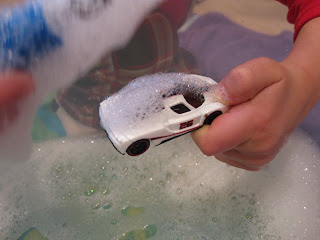 Owen cleans his car.
I wish he’d take care of Dirty Vanny, too.

They played until their fingers were pruney and the bubbles started to disappear, and by the end, the bins were filled with dolls, cars, sponges, and syringes. An odd scene, but for a good long time, three kiddos were pretty engaged.

I had no idea how difficult the syringes would be for Maddy and Owen to use; I figured that Cora would use the droppers more, but really, I was surprised. Anyway, just a little bit of fine-motor-figuring-out on a rainy, dreary, runny-nosed morning.