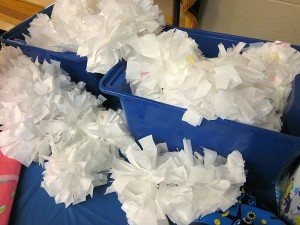 Maddy celebrated her big #7 last month, and we rang in her birthday with a cheerleading birthday party, complete with expert cheerleaders, homemade pom-poms, megaphones, and dance routines.

It was a blast, but we couldn’t have done it without a ton of help from Aunt Katie (who led the pom-pom making team) and our amazing babysitter (an actual high school cheerleader!) and two of her pals.

This post is long in coming, but here’s our insider secrets to throwing a totally fab cheerleading birthday party. . .

Maddy sat starry-eyed at the skill and strength of the competitors.  Young women–and men–were building, dancing, flipping, and tumbling, and when Maddy got a hug from our favorite babysitter on the way out, she talked about cheerleading for days on end. 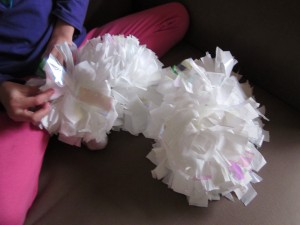 I asked if our sitter would be interested in roping in a few of her pals to be the stars of Maddy’s cheerleading birthday party. Without hesitation, she agreed, and she guaranteed me that they’d come up with a few cheers and a simple dance routine–complete with music–for Maddy and her pals.  They did, and it rocked.

My sister and I got to work on pom-poms for the kids to use during the routine and to double as favors.  With a bit of quick research, we had a general idea about how to make pom-poms at home.

Using kitchen-sized white trash bags, iridescent cellophane, and blue duct tape, Katie tweaked the plan and literally made several sets of poms in a week. We worked together on the rest, and they came out awesome. 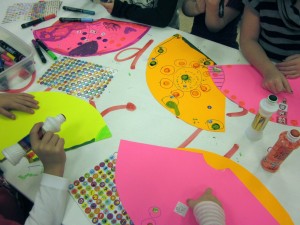 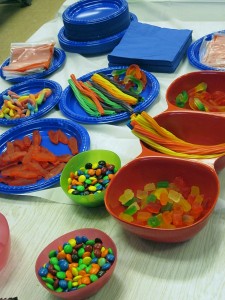 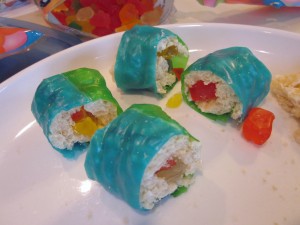 Candy Sushi was a HUGE hit. . . and why wouldn’t it have been? 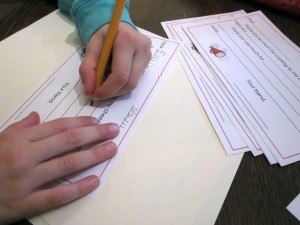 Maddy works on her thank you notes. 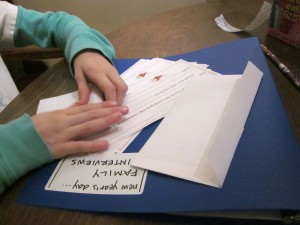 And after the thank you’s were folded, addressed, and sent, and after we worked on the copying of the routine onto DVD’s for each family, we were finished.  We’re still distributing them, but I think they’re a cute favor for the kids and a great memory for Maddy.

The cheerleading party was a big success, but it was only possible with the help of a number of parents who stayed to help, real cheerleaders who spent time creating cheers and a routine for the kids, and with my awesome sister who totally nailed the pom-pom making process. Many, many thanks to everyone for making it work! 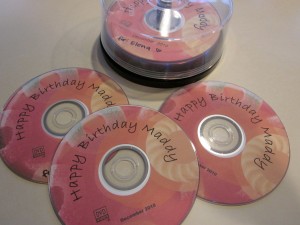 And that was that–our first-ever cheerleading party!  Three cheers for our Maddy and for a super year ahead!

how to have some fun with leftover candy canes
Next Post: sneaky math fun with our indoor lid toss »