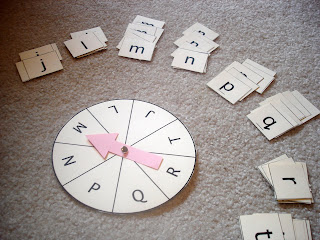 We are back in the game again after a busy week preparing for our fundraiser, so today, before rest time, we played Alphabet Spin II. Much like our friend, Alphabet Spin I, AS-II is the same deal but with letters from the second part of the alphabet.

I did things slightly different this time, and it worked well. Here’s the skinny:

Sorting and arranging the letters was extremely helpful and is something I wish I would have done the first time we played AS-I. Today, while we did it, we talked about the letters as we put them in piles, and we chatted about differences between “tough ones” like j/t and p/q before we began.

I think the next few times we play this, though, we’ll mix up the cards and spread them out around the spinner to make it a little more challenging.

Like most of the cool activities I round up over here, this one, too, is from one of the best books on word study– Words Their Way: Word Study for Phonics, Vocabulary, and Spelling Instruction 3rd edition (Merrill Publishers, 2004). A ton of the resources that I have and use regularly comes from this text. A CD accompanies the book, and on it are hundreds of print-outs, games, and sorts that are organized according to spelling stages: emergent through most advanced.