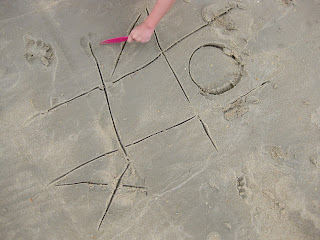 We’ve been home from the beach for a week now, and as I was cleaning up stamps, markers, and stickers this past week, my heart ached for the easy, sandy slate of the beach.

Sure, Cora’s diapers were full of it by the end of the day, and we grew tired of biting down on grits of sand in our snacks, but I wish I would have taken better advantage of the sand as a teaching tool while we were there.

The beach can be a super place to sneak in a little bit of learning–along with all of the free play and fun that long and lazy days there allow. But since most of us cannot be there for much more than a week each year, let us be thankful for sandboxes and sandy volleyball courts at the pool. We can use them instead!

Hey–we can even use the dirt at the park for this kind of stuff. . .

Here’s how this teach mama (and teach daddy) tried to sneak in a little bit of learning last week–even though we were on vacation:

On top of that, with a little game like tic-tac-toe, they can begin to learn simple strategies and game-playing etiquette. 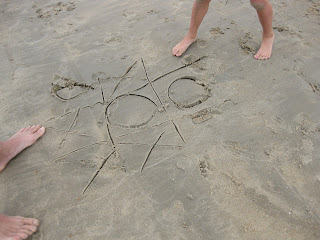 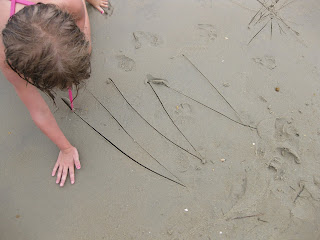 I said, Awesome! Who do you love? (secretly hoping it would be me!). And she wrote CORA. 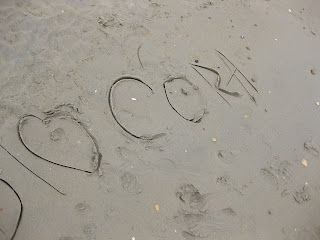 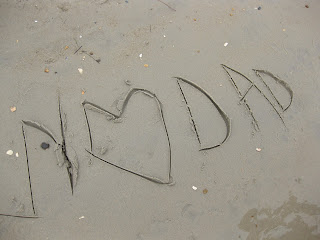 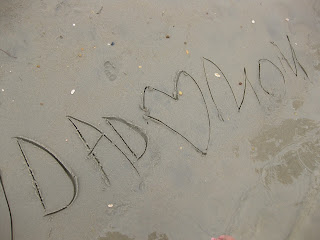 And after MOM, she stopped for a second, thought and wrote CAT, and then she made another heart and wrote DOG. No joke. She looked at me, started to giggle so hard, and then a wave washed everything away, and she started to cry.

She said, But Mommy, I worked so hard and now it’s gone!! And I said, Well, lucky for you I took pictures of it, and now we have it forever.

Except that I was so stunned with the CAT and DOG part that I didn’t take a picture of it after all; instead, I just stood there, frozen, wondering what could quite possibly come next.

The beach–the sand–the dirt–whatever is right there in front of you is a great spot for some learning, whether it be a tic-tac-toe game with X’s and O’s as the markers or with any other letter you’re working on. Who says one guy has to be X and the other O? How about M and Z? L and Q? Numbers 3 and 4? How about 2 and 7?

And the challenge for little ones to write their names–or any word–in a crazy new medium, whether it be sand, mud, jell-o, pudding, sticks, or fingerpaint, is a well-spent few minutes no matter where you are at the time.

Collecting shells and then counting and sorting them back at the house, Googling that weird stuff that washes up on the shore (fish eggs or jellyfish pieces?), writing on the sand, trying to fly a kite, tasting new shellfish from the market–are all cool ways of sneaking in a little bit of learning while you’re at one of the greatest vacation spots around–the beach!

talking stranger safety with kids: a dvd you MUST have
Next Post: new for us friday–amusement park »