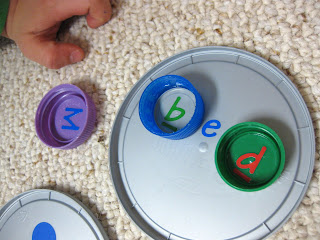 We have been rockin’ it out with our alphabet letter lids since we made them a few weeks back, and occasionally I’ll throw in some word building when the kids are in the mood.

I had a bunch of bigger lids that were just waiting to find a new life outside of their ole lid container, so I thought I’d make work spaces for word building.

I’ve found that Maddy and Owen–and many kiddos, for that matter–seem to enjoy tiny spots for word-creating rather than just making words on the carpet, fridge, magnetic board, or table. 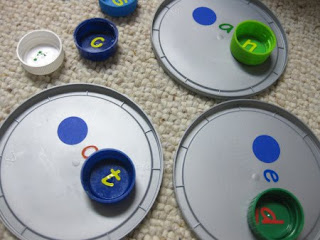 Because short vowel word families are the first ones that emerging readers usually learn, I thought it would make sense to use these with Owen, and the review of the short vowel sounds would be helpful for Maddy.

The first time we used the lids, I said, Hey, Owen! Look at this tiny word-building space.  There’s a dot, the letter ‘a’, and another dot.  Watch how I can put a letter ‘t’ on top of the second dot, and now I have ‘at’, (and then I sounded it out) at.  If I choose any letter and put it on the first dot, I can make a word. Watch.

He got it. And that’s all he and I did that afternoon.  And I was fine with it; changing the first letter of a word that kiddos already know is one of the 7 Basic Principles of  Word Building, and if Owen remembers just a teeny bit of this concept, I’ll be happy. 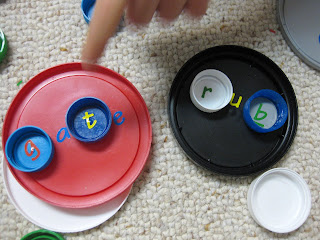 Maddy and I played with ‘powerful e’ 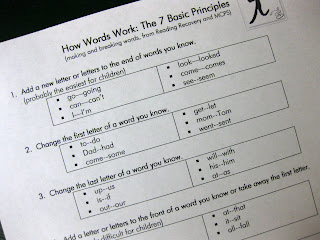 I really didn’t want to make this into a huge and boring lesson for them; I wanted to use a teeny bit of time while they were playing to show them each something reading-related that they would find interesting and relevant.

And part of the reason they maybe, just maybe, get into these things is because I think the concepts are cool–because they really are, aren’t they?

If you’re interested in a pretty neato (yes, I mean ‘neato’) and incredibly handy sheet that outlines the Seven Basic Principles of Word Building (I’ve used it for years and have only modified slightly from Reading Recovery and MCPS), then feel free to download it here: How Words Work–The 7 Basic Principles.

Happy Word Building, and remember what reading researcher, Kathryn H. Au has said: “Making words encourages children to study how letters go together to form words, to look beyond the initial consonant, and to notice vowels as well as consonants.”  We want our kids to love words, to be in awe of what words can do, and to–most of all–have fun building words!

2002, Multicultural factors and the effective instruction of students of diverse backgrounds. In A.E. Farstrup & S. Samuels (Eds.) What Research Has to Say About Reading Instruction (pp. 392-413). Newark, DE: IRA

Thanks to Reading Recovery program and MCPS for most information here.

alphabet letter lids
Next Post:know where the offenders and predators are: family watchdog