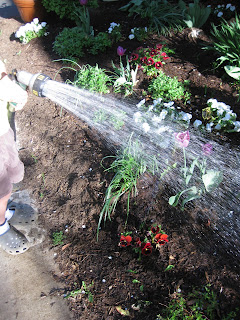 What a perfect platform for celebrating the outdoors and for practicing new ways of being kinder to Mother Nature?

We are trying over here–trying–to be a ‘greener’ familia, and along the way you better believe I’m sneaking in a little bit of learning.

Here’s how we’re throwing in some earth day learning every day:

Maddy, Owen, and Cora literally fight to hold the hose and water our flowers. Thankfully, they take turns depending on whose day it is, but the time standing still is time I feel can be used for more than just down time. So depending on which kiddo is hose-happy that day, we might. . .

Sneak in some math practice by: 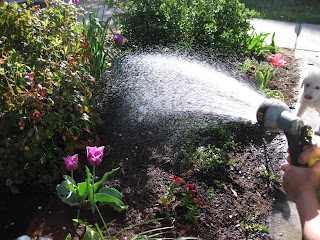 Even Brady’s getting in on the learning fun while Owen waters our flowers!

Sneak in some spelling and alphabet practice by:

Sneak in some phonological awareness practice by:

These are just some of the ways that we sneak in a little bit of learning while tending to our pretty flower garden out front (thanks to Maddy, Owen, and Cora’s green-thumb grandfather!). But these little tricks can be used for just about a million other outdoor activities, like the long stretches of time spent pushing kiddos on the swings, sitting on the sidelines watching never-ending tee-ball games, or pushing those tiny ones in strollers.

I’ll share some other ways we’re celebrating Earth Day over here as the week goes on, but do feel free add to this list, link back to your Earth Day posts, or share your Mother Earth-friendly ideas with us! Three cheers for Earth Week!

Previous Post: « new for us friday: er-u-di-tion (a sight words game!)
Next Post: quick trick: the power of positive talk »