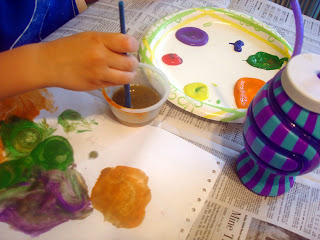 So funny how some days work out. With a dragging mom after a DC Metro Moms night out, and with three runny-nosed kids and another rainy day, we brightened our afternoon with rainbow paints, mixed-up colors, and color carving.

I covered the table with newspaper, smocked the kids, and put a blob of each color on a paper plate for Maddy, Owen, and Cora. Then they got to work. They just painted. And experimented. And added water, then changed brushes. Then added more water and tried a new brush. They made globs and blobs. And lines and spots. Happy faces and triangles. And then we mixed colors.

I showed her how to take a bit of each to make orange, then she did it on her own. And so our mixing extravaganza began. We mixed blue and yellow to make green, then red and blue to make purple. These paints totally rock for mixing and blending, the colors are so true. Owen got in the mix. And then Cora tried her hand at it, and we were a mixing bunch of fools. Everyone’s paper plate palate was a big, thick, mass of color. So we started carving. 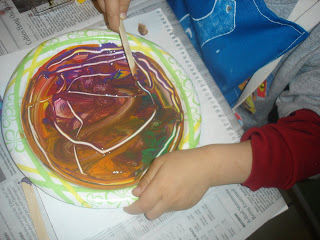 And then Cora dumped her water on her plate, Owen thought it was funny and dumped his on his plate, and I called “clean-up!” before our kitchen was afloat in paint and wet newspaper.

Thank goodness everything was washable. . . and thank goodness for a little bit of learning and some runny rainbow paint on another rainy Tuesday.