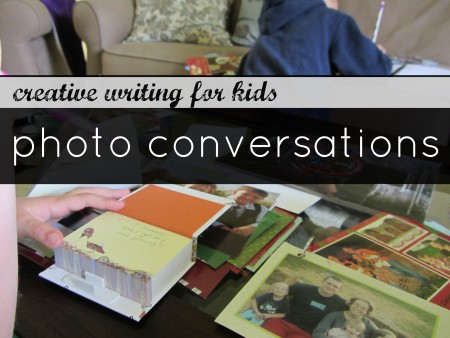 Getting kids to write–especially in the summertime–is not an easy task.

Granted, for some kiddos, writing is their thing. They journal, write stories, text, (maybe even blog!) without a bit of prompting. But other kids, well, they need more of a push. They need a reason to write. And it has to be a good one.

One of the coolest activities we’ve done up to this point with our Everyday Journals was Photo Conversations because it immediately got my kids’ attention. It made them want to write.

It was hands-down, Maddy, Owen, and Cora’s favorite so far.

We did it one day after lunch, and they asked to do it for the next three days. Three days!

So that’s what we did for the next three days.

It’s fun and easy, and with enough scaffolding, it can be a super creative writing activity even for little ones. 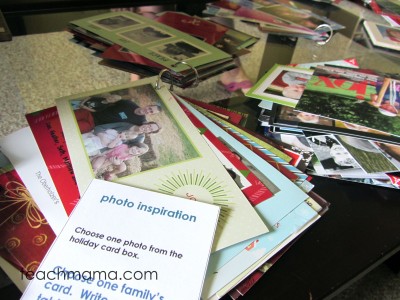 The holiday cards are a great starting point for photo conversations.

We started by choosing the card from Everyday Journals while we ate breakfast, but we couldn’t complete the activity right then.  We rushed off to swim and dive, and by the time we came home, it was time for lunch.  But the kids kept asking to start it, and I kept pushing it off until wet bathing suits were off and bellies were filled. 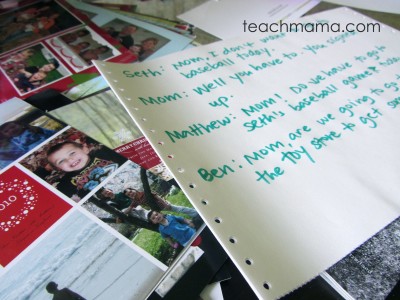 So by the time we got started, I was worried that there would be all this build-up for an activity that they thoughtwas totally boring.  Thank goodness that wasn’t the case.

After we got settled, I read the prompt:

Choose one photo from the holiday card box.  Choose one family’s card. Write a dinner table conversation they might have.

I pulled down the holiday card box, and I placed the cards on the coffee table.  They each grabbed one and then started flipping through the pile.  Maddy found one she wanted to use–her cousin Wyatt’s–and Owen and Cora each found one they wanted to use.

Then I said, Okay, so here’s the one I’m going to use as an example.  The card says ‘Write a dinner table conversation they might have’ so let’s think about the things we talk about at the dinner table.  What kinds of things does our family talk about while we’re eating dinner?

The kids came up with things like sports, the day’s activities, school, work, and homework.

You got it, I said.  So we’re going to use this card (I showed them a family’s card who they all knew), so let’s together use our heads to write down a conversation we think they might have at dinnertime.

I started by asking, Who do you think should start the conversation?

Okay, so Seth will start the conversation.  I wrote ‘Seth’ on the page.  What will he say?

It was a rainy, grey day, so Owen said, Make him say that he doesn’t want to play baseball today.

I wrote it on the paper.  Who will respond to Seth? I asked. 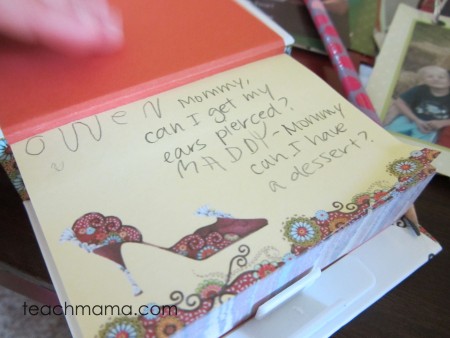 Maddy jumped in.  Let’s say that he has to go to practice because he signed up for it.

You got it.  I wrote what she told me.

And we continued together until the conversation was finished.  Then I read the whole thing, and I asked if they wanted me to add anything else.  They didn’t; they just wanted to get started on their own.

So they grabbed their photos and scattered, but I stayed with Cora to transcribe her conversation.  She wanted to write–something–so she chose a photo of our family and wrote ‘Owen’ on the page.  Owen will start, she said.  And I want him to say, Mommy, can I get my ears pierced?

I knew this was going to go downhill from here, but I wrote it anyway.

Okay, I said.  What next?  We worked together on her conversation, with me writing as she dictated.  When she was finished, we stuck her note sheets in her larger journal. 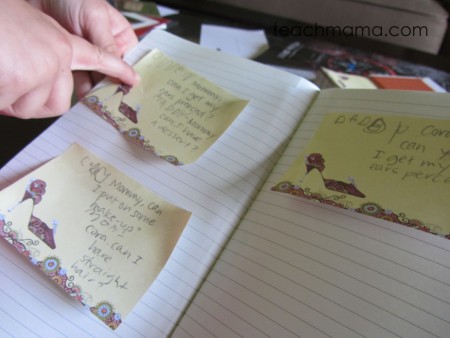 Cora’s conversation was written on her beautiful high-heel post-it notes and then stuck in her journal.

Maddy and Owen worked hard on theirs, and Cora worked hard on hers with my help. When everyone was finished, we shared.  We laughed, talked about things we could add if we wanted to write more, and we laughed some more.

And though I didn’t give much constructive criticism–more praise than anything because this is just for fun–I did ask how natural the conversations sounded.  Do you think we’d talk this way at dinner? Do you think our friends would talk this way?

We chatted a bit about how maybe different things might have sounded, along with the fact that a conversation is a back and forth exchange of ideas between two or more people–and that was it.  I think the discussion did help with the kids’ later conversation writing, so I’m glad we had it.

But that first day, we moved onto bigger and better things, put the photos and journals away, laughed a bit about their silly stories and moved into the next part of our day.

One thing I may revisit is the idea of recreating Mini Writing Centers, especially for our Everyday Journal writing prompts–the ones that require us to move outside, upstairs, or anywhere beyond our living room or work room.  I love the idea of keeping all things writing-related in one compact spot.  And I think that when kids have all the supplies they need close at hand, they’re more likely to really let those creative juices flow!

fyi: This blog post is part of an incentivized online influencer network for Mom’s Homeroom. Mom’s Homeroom is brought to you by Frosted Mini-Wheats.