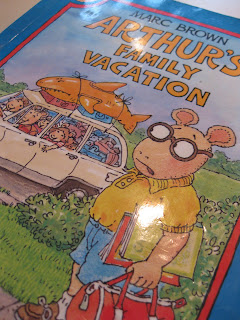 As I’ve said before, little ones can learn important reading strategies even before they’re decoding the text by themselves. All they need is an adult to model those methods during read-alouds.

September’s issue of The Reading Teacher contained an article that I found particularly interesting because it focused on a smart–and very easy–technique for increasing emergent readers’ print knowledge. I know that I had not consciously used this with Maddy, Owen, or Cora before, and it is amazingly worthwhile.

I’m sure that we all do this sometimes, unintentionally, but last night I tried to do it more consciously.

Owen chose Marc Brown’s Arthur’s Family Vacation as his nighttime book, which we’ve read a million times over the last few years, but this time was a little different: I was a Print Referencing Mama!

It turns out, it was so easy. And I think that print referencing was actually better suited for a text that we were familiar with because we had already worked out the “story” issues on previous readings. 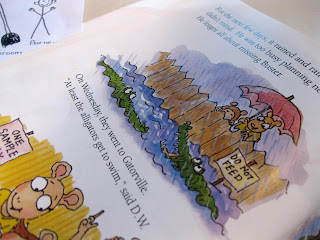 D.W. — a perfectly easy name to read and use for print referencing!

Here’s the print referencing that I did last night:

Check out the way that ‘family’ is written on the page. What do you notice about it?

Maddy said, The words are crooked.

Yep, you got it. They’re slanted. This is called ‘italics,’ and the author does this with certain words because he or she wants us to emphasize the word, like this: (I read the sentence again, emphasizing ‘family’.)

We talked about why Mother might have said ‘family’ a little louder and slower (because she wanted to explain to Arthur why Buster couldn’t come along), and then we moved on.

Pointing out the storefront signs (like the Eight Cousins Books store), the Do Not Feed sign near the crocodiles or the postcards written by Arthur and D.W. sure made for some silly reading for Maddy and Owen. And stopping to identify the function of the print in these places will help to make them more aware of print on the page in subsequent readings and in other texts.

My print referencing was minimal, but my intention was simply to use whatever book Maddy and Owen chose that night for the technique. I got lucky with italics and signs, but here are some other prompts mentioned in the article to consider:

Questions: How many words are on this page? / There are words in the wolf’s speech bubble; what do you think they say? / Which word is longer, ‘dinosaur’ or ‘dog’?

Requests: Show me where I would start reading on this page. / Point to a letter that’s in your name. / Point to the title of the book.

Comments: The illustrator wrote the word ‘bus’ on this yellow school bus. / These two words are exactly the same.

Nonverbal techniques (teacher): Track the print from left to right while you read the text. / Point to print.

So why, oh why would we even consider spending time on print referencing? Aren’t the other reading comprehension strategies (think: predicting, questioning, visualizing, etc) so much more important? (That’s what I was wondering, at least. . . )

This article mentioned recent studies that have shown that ‘print referencing can be used alongside other techniques that can promote children’s language growth within the read-aloud’ (Zucker article). When teachers used this technique with some regularity, students demonstrated increased print knowledge, metalinguistic understanding of print, and a heightened interest in print during reading. Sounds good to me. . .

fyi: Here are some other easy-peazy comprehension strategies to use with your emerging readers:

Thanks to a really awesome article. I certainly didn’t do it justice here, but it is worth checking out: