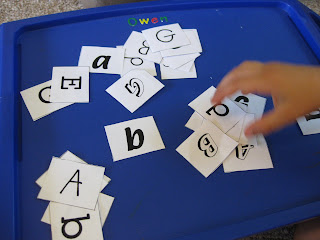 Today Maddy was not keen on any sort of learning game or activity; she wanted to play with a calculator after her dad showed her how to use it.

She was doing simple addition problems–Mommy, two plus two equals four! See? You just press this. . .

Why didn’t I think of introducing my kiddos to a calculator before? Leave it to dad to show them the really fun stuff.

But Owen was up for some sorting after he played some music and sang some songs for Golden and Guinea. Seriously, the excitement never ends here.

It was a long swim-team and playground morning, so I grabbed an activity that I thought would be engaging and interesting for him:

This sort didn’t involve rhyme sounds, tricky beginning sounds, or word families. It just focused on categorizing similar letters written in different fonts, and some of the fonts that are out there are pretty tricky. So I set it up more as a game, like I did with letter sorting and other sorting games we’ve played before.

I said, Okay, Owen, I have a bunch of letters here, all typed differently. Some are uppercase letters, and some are lowercase letters. Some are fancy and some are plain. You will recognize most letters–because you have a great eye for letters and you know so many already. But let’s see if you can put these letters in groups–put the A’s in a line here, the D’s in a line here. . .

He started grabbing at the letters to put them in lines. He was cookin’ with steam for a while, sorting tricky lowercase a’s, d’s, and b’s. But then he glanced up and saw Maddy hanging with G & G, and he jumped up to join her.

I left the sort where it was, said, All right, Owen. You finish when you’re ready. And I dodged into the kitchen to finish cleaning up lunch. Why pressure him? It’s supposed to be fun for goodness’ sake– 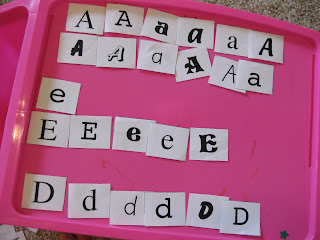 When I came back, someone–either Maddy or Owen–had finished “chatting” with G & G and had completed the sort. I heard tiny sneaky feet running up the stairs by the time I made it to the living room, though, so I wasn’t able to do much follow-up with him–them?–and was kind of happy they had headed up for their rests on their own.

Hey, if they’re going to be sneaky about things, I’ll be happy with it being something like this, right? I am hoping they didn’t sneak any toys into G & G’s cage as well. . . 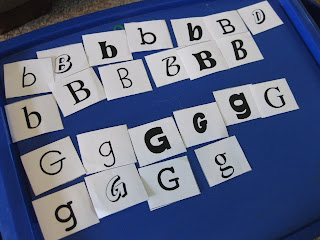 If I were able to do a follow-up with them, I would have:

Tomorrow or this evening, I’ll bring this sort out again and try to wrap it up a little more cleanly if I can.

Thanks to Bear’s Words Their Way (2003) once again for providing today’s little bit o’ learning.