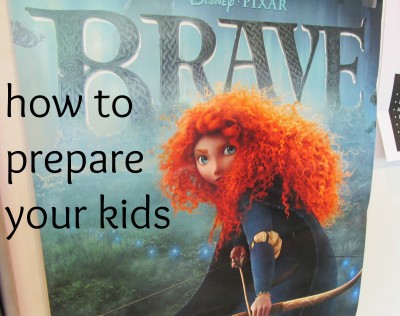 Since we don’t go to the movies all that often, I’m all about doing what we can to prepare kids for movies before we go. I’m a nervous kind of mama who, for the longest time, started Finding Nemo after his mom (gulp!) dropped out of the picture and who fast-forwarded the scary parts of Cinderella, Monsters, Inc., and any other movie with hunters, fires, or kid-engulfing natural disasters.

Before we commit to any new-to-us movie, I wildly scan common sense media, and I’m proud to say that usually–usually!–my husband will do the same.

I definitely think a little pre-movie research is important when kids are as young as mine.  Quite honestly, sleep is too precious for all of us, and I think their little brains and hearts are too precious to put at risk for tricky, in appropriate content.

Plus, if we can sneak in a bit of learning along the way, why wouldn’t we?

So when I heard that Disney PIXAR was working on a new movie with a red-haired, strong-spirited, Scottish heroine, I was intrigued.  Having spent a semester in Scotland, there’s a special spot in my heart for the country.  I wanted to take Maddy, Owen, and Cora, but I also wanted to make sure that they would be okay with it.

The preparation was wise, because, for many young ones, as awesome as Brave is, it did have some startling parts.

It’s not rocket science, but it’s not something to take for granted, either. Activating schema is something that with a teeny bit of preparation, all parents can do with relative ease. It can be as simple as recalling how a friend with a Scottish accent speaks or as involved as reading a book about Scotland before you head to the movies. 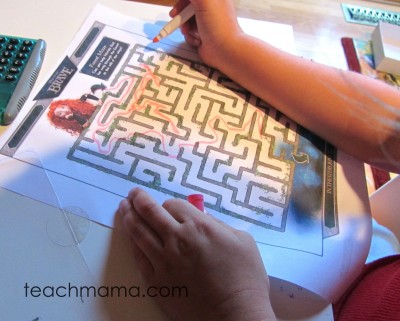 Brave mazes got the kids into the ‘Brave‘ spirit.

Before we went to the show, we played with some Brave printables, we looked at some Brave trailers, and of course, we talked about Scotland and its amazing geography and castles.

We watched some awesome Brave trailers:

It’s important for kids to know what a legend is, so another option is to talk with them about legends–what they are, why they are important, and how they have shaped beliefs and ideas.

Want to do a little more pre-Brave movie preparation? Check out my pal Leticia’s Virtual Field Trip of Scotland on parents.com –it’s fabulous!  And your kids will love the get-away!

If you can’t manage all of this pre-viewing fun before you go, just do what you can! Then perhaps when you come home, a great follow-up would be to incorporate some of these activities into your day.  Enjoy!

fyi: My family and I received tickets to see a pre-screening show of Disney PIXAR’s Brave, though this is an unsponsored post.  All opinions and ideas are my own, influenced only by my three little movie-goers and experience as a teacher and parent.