just owen and me, sorting s’s and t’s 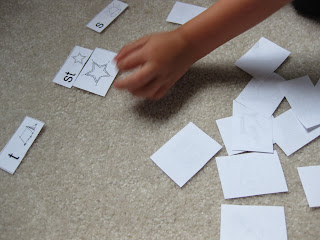 Owen and I did a simple sort today–another beginning sound sort that focused on s-, st-, and t-. He is used to doing sorts, but the way we did today’s was a little different.

I did it more to have him work on his pronunciation of the s- sounds, but it also helped him distinguish the somewhat tricky st- beginning blend sounds.

I am well aware that certain sounds take longer to master for some little guys, so I’m not worried, but if we can work on them while playing games, why not?

I introduced the three different sounds we would “search for” by talking about the sounds s-, t-, and st-. Before we looked at any of the picture cards, we talked about words that we knew that began with each sound. This little brainstorming helps get kiddos’ brains ready for some of the pictures they may encounter.

I never made a big deal Owen when he pronounced his s- words incorrectly; I just repeated the word correctly–not too slow or fast–in a normal conversational tone. 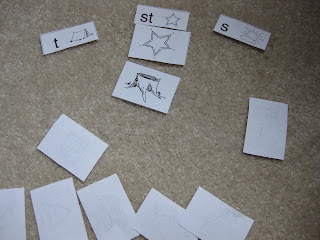 Then, as we put all of the picture cards face down in a big pile, I identified each picture.

Finally, we took turns flipping them and figuring out under which category they best fit. I started by flipping a card and saying, Yes! Star! Sssttttar. Hmmmm. Where do you belong, star? Let me see–ttttent, star? No. Stttar, star. Yes! That was a lucky one because there’s a picture of a star right next to the st-.

Owen flipped a card, and we did the same thing. I really stressed listening for the hidden t- sound after the initial s- in stump, and he picked up on it.

If either of us made a mistake (and we both did!) we let it go until the end, when we checked our work. When we moved st- cards from the s- column, we did so because the st- words had “hidden t’s after the s“. Blends are still very tricky for little ears. 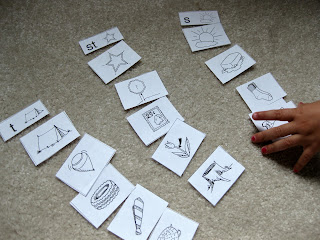 Once we finished, we shuffled the three anchor cards and picked one. We decided that we would be “in charge” of that sound and that we’d share the last one. After putting all of the cards face down again, we searched for our own sound and put those cards in the correct column.

We did the same thing one last time–nothing like a little repetition–and we called it a “speed sort“. We picked cards as fast as we could and called them out as we placed them under the correct sound. Fun, fast, and I’d honestly do it a million times to hear Owen’s giggling as he shouted out the words.

So that’s that. Just a tiny bit of beginning sound learning and tricky s- pronouncing for us today, disguised as play.

Thanks again to Bear’s Words Their Way (2003) for another fun sort!