We chatted about how in order to get mail, you’ve got to take the time to send something yourself, so this morning before Maddy’s last pre-team swim practice, Owen and Maddy got to work.

They were determined to write some letters and color some pictures to send to their pals, secretly hoping that they’d get a return note in the next few days. Woo-hoo! Talk about an authentic reason to get my kiddos writing. So what if they were doing it just to get some mail–anything to get them into writing was cool with me.

I was more than happy to help them with some shared writing and to take them to the post office for stamps later in the day. And I have to admit that some envelopes were sealed before I had time to make sure that they signed their names–such is life when you’re juggling three little ones, all scribbling, writing, and drawing at the same time! 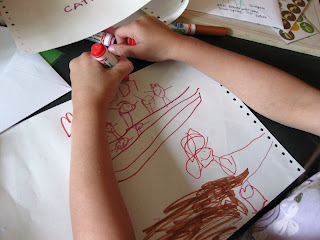 Maddy’s picture for her pal.

Instead of giving the spelling of a word to Maddy, I let her take the lead. She said, I want to write, ‘Dear Emma’. Dear–

I sounded out the word with her: Dear. Ddddddear. What sound do you hear at the beginning of ‘dear’? That’s right, ‘d’. ‘Dear’ begins with ‘d’. Then I would write a ‘d’ on my paper and Maddy would do the same on hers. I usually give her the difficult vowel sounds and worked with her on the rest. I wrote ‘ea’ after ‘d’ and said, What sound do you hear at the end of ‘dear’?

She sounded it out again and said, ‘R–‘ I hear an ‘r’ sound. ‘Dear’ ends with an ‘r’. So I completed the word on my page and she did the same. Sometimes I’d let her finish the word first if she felt confident with it, and if she made mistakes and kept going, I let her go. My goal was to let her feel comfortable with writing–not to bruise her ego. If she asked if she was correct, I’d work with her; if not, we moved on. 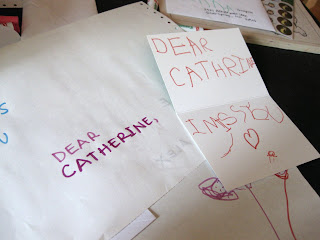 Another of Maddy’s letters to one of her friends.

Their letters were simple–Owen’s were mostly quickly scribbled pictures, the name of his buddy, and his name. Maddy’s letters were short and sometimes included a picture she drew. And that was it–the letters and pictures went in, I wrote the address, and they put on the stamp and return address label.

Here’s why it’s so important to get our little ones to read and write topics that interest them:

Last night, I finally had a second to sit down and read the June/July 2009 issue of Reading Today. Kathryn H. Au is the International Reading Association President, and I found her article in Columns and Commentary to be especially interesting; it focused on giving students “ownership” of literacy–something that I think not enough of us as parents and educators do.

She wrote that as the US and other countries push for higher standards of literacy achievement, education in general is shifting towards an emphasis on proficiency and not on student motivation to learn or eventual ownership of what skills they do master. Au believes that “proficiency without ownership leads to students who may have control of strategies and skills but no reason to use them, but minimally. Ownership without proficiency leads to students who may have goals but lack the know-how to accomplish them.” There’s got to be a balance and a paradigm shift in order to make it happen.

Au goes on to say that to change this, “teachers must be a reader and writer, to help students take ownership of their own literacy” and they must share experiences about how they use reading and writing in their lives. She also believes that teachers should share their own tastes and interests as a reader and help their students develop their own tastes and interests as readers. (Promoting ownership of literacy. (June/July 2009). Reading Today, 26(6), 16. )

We as parents can do the same things at home–demonstrating that we use writing and reading for authentic purposes every day. Reading the newspaper, making grocery lists, reading recipes–and letting our kiddos in on this fun can actually help them in the long run.