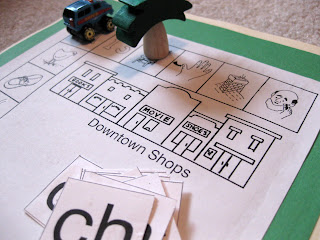 Maddy had a half day of school today, so Owen, Maddy, and I had a chance to play some “before rest time” games just like the good ole days.

For awhile now, I’ve wanted to revisit with Owen those very tricky, tricky digraphs from a few months ago, and I thought that today would be a good day. Maybe Maddy would be able to help guide Owen a bit? Or maybe now certain sounds will have clicked a little for Owen? I wasn’t sure.

Today, we merged those tricky digraphs with a shopping follow-the-path game. It wasn’t as fancy as some as our other games, but this rainy, gray day and a fun play date morning had my kiddos unusually tired today.

To play, I printed the Shopping for Digraphs Game from Bear’s Words Their Way (2004), then I glued the board on the inside of a manila folder. I glued the sh, ch, and th cards to a piece of cardstock so they’d be more sturdy then cut them apart.

I told Maddy and Owen that before books we’d play a new game–a tricky digraph game–that I thought they’d like. So I asked them to search around their rooms for something tiny that they could use as their game piece. Maddy came back with a tiny green train (from our Domino set?), and Owen used a tiny car. I used a palm tree from Owen’s car set. 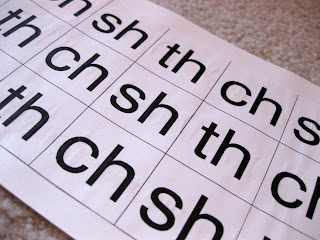 an extra board of game cards

I said, This game is kind of like Owen’s Beginning Sounds Game and kind of like Cora’s Color Game, but it’s also different. This time, we’re going to use our ears to help us hear the differences in three tricky sounds–sh, ch, and th. What words can you think of that begin with the sh- sound? The ch- sound? The th-sound?

We took a minute to look at the board and to identify the pictures around the board, and we began. We’d identify the sound of the digraph on the flipped card, and then we’d say each picture until we found one that matched: Ch-ch-c 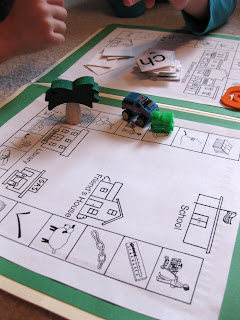 It was too easy for Maddy but still difficult for Owen, who is still struggling to make these sounds himself.

I’ll continue to play these digraph games now and again to make sure that Owen realizes that ch-, sh-, and th- are indeed three distinct sounds, but I won’t worry if he isn’t able to create these speech sounds for some time.

He’s only four, and they may not arrive for a while. As long as he’s still up for my games and thinks that all we’re doing is playing, I’m in the clear. . .

And that was our tiny bit of learning on this rainy fall day. Show All