math in the kitchen with veggie kabob patterns 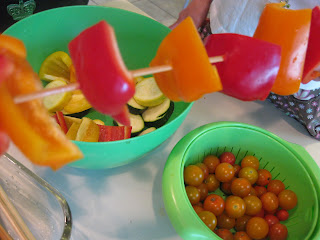 This summer, I’ve tried to be more math mindful, since (I’ll say time and time again) it just doesn’t come naturally to me. So what better way to play with math patterns and concepts than with veggie Shish Kabobs?

With a few peppers and squash from our local farmer’s market and a ton of tomatoes from our garden, we threw in a little math fun yesterday, talking color, shape, and type of veggie patterns, while trying not to poke our fingers too hard with the skewers.

So I said, Hey Maddy, Owen, and Cora, I need help!! Who wants to play with some food and help me get dinner ready so that we can hurry up and make it to the pool? 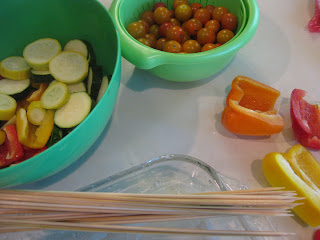 veggies and skewers, ready for some action

Owen must have been hungry (or pool-happy), because he was the first guy up on the stool to help me, and Maddy followed soon after. My usual right-hand woman in the kitchen was not as excited to help me; she was pretty engrossed in some other more important puzzle and doll business.

When Maddy and Owen were both at the counter, I told them, We’re making Veggie Shish Kabobs now so that when we get home from the pool, we can just throw them on the grill. But I don’t want these to be boring, plain, old Shish Kabobs. We need to make them a little more exciting by making them into cool patterns. 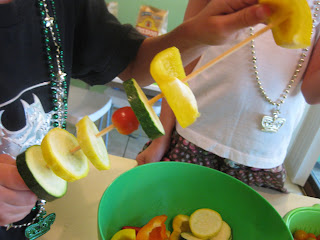 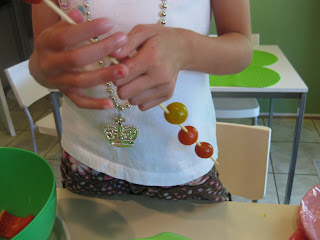 You can use anything here–tomatoes, yellow or green squash, or red, orange, or yellow peppers to make your pattern. Watch me.

I made a basic ababa pattern with green squash and yellow peppers, and I reminded them about what makes a pattern.

Then I said, The pattern can be with color, shape, or veggie. You decide. As long as you can explain it, it works!

We got creating, but we did so very carefully because this was the first time the kids had used wooden skewers. By this point, Cora joined in on the fun but stuck to the cherry tomatoes on hers. (I knew they’d end up squishy and shriveled on the grill, but I like them, so I didn’t mind.)

For Cora, we worked basically on counting–one-to-one-correspondence of object to number, and that’s it. With cherry tomatoes on a skewer, it’s easy.

Maddy and Owen would finish a skewer and explain the pattern, and 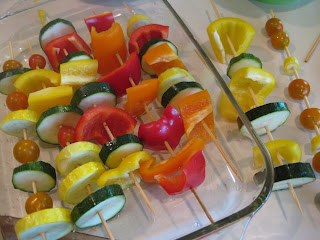 sometimes we had to do some correcting, but most times they seemed to understand and had fun with it. We threw some Italian dressing over the veggies, put them in the baker, and they were ready to go.

Veggie Shish Kabob-making proved to be a cool, worthwhile way of getting my little helpers involved in our meal-prep (so we could go to the pool!) while at the same time, getting them thinking in terms of patterns and numbers.

I’m a big fan of using food for learning–not mindlessly or in a wasteful way, but rather with cooking, honing fine motor skills or learning colors, creating shapes, trying new things, or even playing with patterns.

Happy eating and learning in the kitchen!

Need some other fun ways of sneaking in some math learning? I find inspiration at we teach–the math group (and all of them, really!) totally rock!

Previous Post:new for (me!) friday: yahoo mother board summit
Next Post:quick trick: playing on positive behavior