new for us friday: er-u-di-tion (a sight words game!) 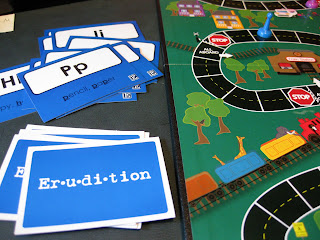 We’ve had this game for quite some time now, but it’s only in the recent few weeks that we’ve really explored how much fun Er-u-di-tion had to offer our little family.

It’s been awhile since we’ve tried out a new game for our New For Us Friday, so when I brought this game out to play, Maddy, Owen, and Cora were pretty excited.

The game is called Er-u-di-tion, and it is “the game to jump-start the road to reading”. So you know that this teach mama was totally interested in trying it out for herself.

And the coolest part? I’ve got one to give away to one lucky reader!

Want to see why this game is perfect for any family, playgroup, or classroom?

The premise of this game is to “jump start the road to reading” by getting kiddos to play with the letters of the alphabet and sight words while they travel through “literacy land”. Since I’ve got a few game-crazy kids over here, they’re usually up for anything, but the added challenge of identifying letters or reading words while playing a game really makes this game a hit for Maddy and Owen. 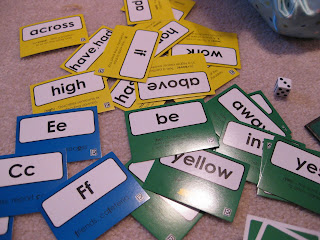 the letter and word cards

With each player’s turn, he first rolls the dice and moves that number of spaces. When he makes it to that spot, he can then earn a “bonus” turn by identifying a letter or reading a word on one of the cards. If he does so correctly, then he rolls again and moves that many spaces. (This is why it’s a “game where you go twice on your turn,” game according to Owen.)

One of the cool parts of this game is that players with varied abilities can play together. If there’s a little guy who is just learning his letters, he’ll use the blue letter cards, but if there’s an emerging reader playing, he’ll use any one of the three sets of sight word cards. One set of cards is easiest, the next is more difficult, and the last is most difficult. 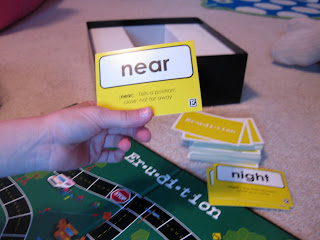 Proud Maddy! She read ‘near’ and scored a bonus turn!

Because I always hesitate to put new readers on the spot (and because I’m sooo not competitive when it comes to games), when we play a “challenge” game, meaning that Maddy and Owen were stretching their card choices a bit, we play that they can pick two cards. I’d say, Okay, for your extra turn, can you read this card (pointing to first card) or this card (pointing to the other)? That way, they didn’t feel crummy for not being able to read a tough word, but they were still confident enough to take the leap. (I’m big into choices, with parenting and learning.)

Overall, I really, really liked that:

I wish that (and these are little wishes):

Okay, so if you’re up for scoring your own Er-u-di-tion game, it’s pretty simple:

Disclosure: I was contacted by the kind people at Er-u-di-tion and was asked if I would take a look at their product. Maddy, Owen, Cora, and I loved it so much that I asked the creators for an extra product to giveaway to my awesome reader friends. Simple as that!