new for us friday–going coconutty! 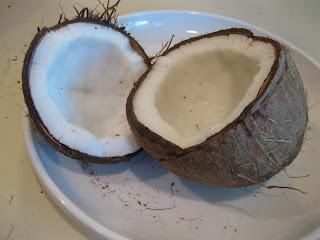 Wondering what new something we could try for our next New for Us Friday, I grabbed a coconut while I was at the grocery store this week. I remembered my mom having one for us when we were younger, and it was so amazing to me that there was liquid inside of this strange fruit.

Having already unnecessarily butchered our mango a few weeks back, Maddy suggested I search on the Internet for a lesson on how to open the coconut before I do the same to this poor guy. How’d she get so darn smart? 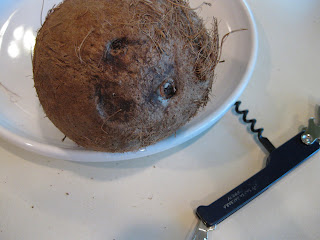 Woo-hoo! I made a hole in our coconut!

First, I handed the coconut to Maddy, then Owen, then Cora to hold and shake a bit before I attempted to open it. I wanted them to feel how rough the outside was, how heavy the fruit was, and to hear the liquid inside it.

I used a wine bottle opener and scored one of the “eyes” so the water could drip out. This was easy to do, and Owen thought it was so cool to empty the water into a small bowl. We all tried a tiny sip of it–and everyone said that they didn’t care for it. We were off to a good start. 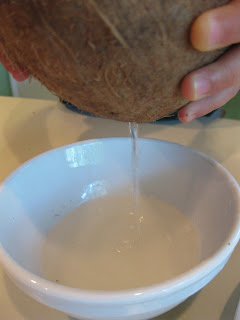 Next I tried to open it. Not so easy. I found the “equator” and tried to use the back side of my (ahem. . .) bread knife to knock around the circumference, but that did nothing. Then I grabbed a hammer and some sort of awl-like tool I found on my husband’s work bench and tried to hammer around the equator to crack it. Unsuccessful.

My kiddos covered their ears while flecks of coconut shell wound up all over the counter and floor. Eventually Owen ran into the living room–too much excitement for him–and eventually the darn coconut cracked. 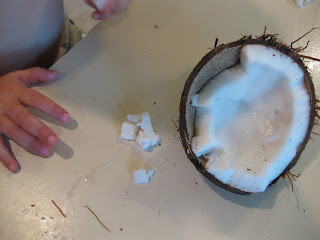 Finally! Our cracked coconut next to the coconut that Cora
spit out on the counter. Not yum.

I broke off small pieces for everyone to try, just like the video demonstrated, and consensus was that they didn’t love it. Maddy said it tasted like “hard and chewy nothing” and Owen just said “Yuck.” In fact, after Cora spit hers out on the counter, Maddy and Owen followed suit, and they all just about fell over laughing.Most likely, if they remember anything from this coconutty-afternoon, it will be an image of their mom pounding the life out of a coconut with a hammer and some strange tool and them spitting out their coconut on the counter and falling into a fit of hysterics. We were all a little nutty after this experience.

So that’s what was this week’s NFUF. We determined that we are not a coconut family after all. I’m seriously hoping we can hunt down a winner for next week.