new for us friday: wolf trap (and ticket giveaway!) 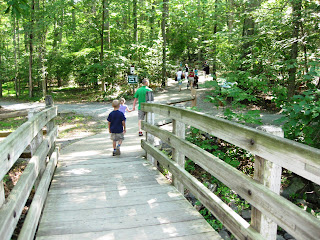 This week’s New For Us Friday involved a little travel, a lot of sun, a picnic, and a show that got us movin’ and grovin’ all in the name of dinos. It was awesome.

We spent the morning at the Children’s Theater-in-the-Woods at Wolf Trap National Park for the Performing Arts in Vienna, Virginia!

And you can go, too since the great people there have given me a day pack of tickets for a family of four for a family’s choice of summer Theater-in-the-Woods shows.

Really, it’s a really cool opportunity, and it was a really fun new-for-us activity. The skinny on this week’s NFUF:

But the big, nerdy teacher in me did do some research on Wolf Trap’s easy-to-navigate and richly informative site, so that I had an inkling of what to expect once we got there. I knew our plan was to see Dinorock and Hayes Greenfield, so I went to their shows and (eeeee!!!) printed out a pdf pre-performance study guide for each show. 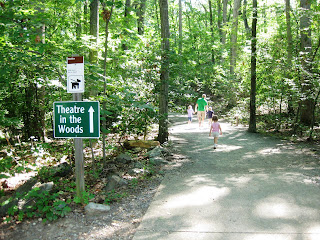 following the signs to the Theater in the Woods

Seriously! Pre-performance study guides are available for nearly every show in the Children’s Theater-in-the-Woods series. I wanted to sing! I wanted to dance! I wanted to hug the smart person who created these!

I’m not going to pretend I’m a super-teacher-mama here and that Maddy, Owen, and Cora completed every activity in the guides. I’m certainly not, and they didn’t. 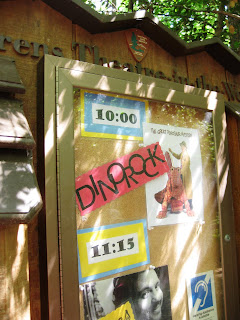 However, I did read through the guides at breakfast and in the car (fyi: my husband did the driving, and I did the reading!).

The ideas, vocabulary, and concepts were super for getting my kids’ brains moving in the right direction so that they’d get the most out of each show. And they gave me an idea about what to expect with the performances. Thrilling.

The Children’s Theater-in-the-Woods is really unlike anything our family had ever seen; it’s situated in the middle of the woods on 117 wooded acres. The theater is open, airy, and it seemed like every seat had a perfect view.

Dinorock’s The Great Dinosaur Mystery was a fantastic show for our kiddos. The audience helped Dr. Vander Plastercaster and Detective Joe Kafootsie solve the mystery of disappearing fossils, and it was just enough plot to keep the kids interested without confusing or boring them. Filled with songs, movement, funny and engaging dinosaurs and two silly actors, the show seemed perfect for kids ages Kindergarten through grade six.

After the show, we parked it at a picnic table, ate our lunch next to the creek, and basically enjoyed one of the most gorgeous days of the summer in a park we already cannot wait to revisit. With 70 performances from June through August, I’m sure we can schedule another visit soon.

Ticket Giveaway Info:
If you and your family would like day pass for Wolf Trap’s Children’s Theater-in-the-Woods, here’s what you need to do: leave me a comment telling me which week you’re interested in going, and your email address, and that’s it.
This giveaway ends midnight on Friday, 07/09/10, and random.org will choose the winner.

Your show choices are below, and the winner can select any day of either set of performances.

A great big thank you to the kind folks at Wolf Trap Foundation for giving our family tickets to the Dinorock show. This is not a sponsored post, and the opinions are all my own, influenced only by my three little ones.

Previous Post:keeping summer reading fresh, fun, priority one
Next Post:ringin’ in the 4th with sparkle pens and flag treats