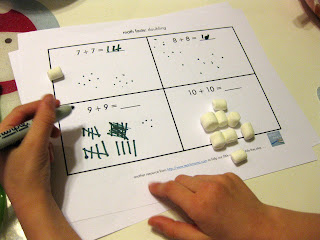 I’m really trying to get over my mental angst about math and set aside more secret–and fun!–math learning throughout the day.

Maddy’s been working on doubling, so for the last week or so, we’ve been having a little doubling fun. the doubling practice sheet with Maddy’s little
tally marks below

I’d say, out of the blue, to try to make her giggle: I’m glad I have two eyes, but if I had two more eyes, how many would I have? Or,

I only have three kids–a Maddy, an Owen, and a Cora. If I doubled that and had three more kids, how many would that be? Or,

In my dreams, I’d eat five ice-cream cones today. And then I’d eat five more right after I finished the first five. How many would I have just eaten? Do you think my belly would double in size?

I grabbed a handful of marshmallows, and we used them to demonstrate the doubling problems. The low numbers she knew already, but as we reached 6’s, 7’s, 8’s, 9’s, and 10’s, the marshmallows helped her count out the problems.

We also showed her how to make tally marks or dots to count the numbers if she was stuck, then add the numbers together for the answer. She was totally fine doing a few problems a night–every other night or so–even when we didn’t use marshmallows. 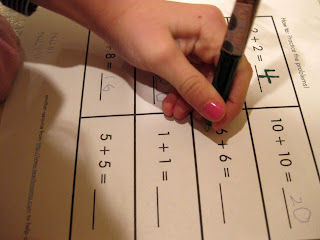 I’ve been on a search lately for some really cool, reliable, ad-free sites packed with worthwhile math games for little ones.

So far, here’s what I’ve found:

Even at Maddy’s Math Curriculum Night last week (where I was introduced to some of these sites), I nearly had an anxiety attack right there in the media center when they put us in groups and had us work out a few word problems. I ended up copying the guy across from me, and I’m not kidding. I did ask before I did it, though, which in my mind makes it okay. . .

Feel free to send me any other math-related sites you think are worthwhile, and I will add them to this list.

I am scheduled to post our favorite literacy-related sites next week, I promise!