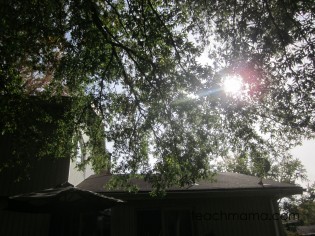 Thanks to Walgreens for underwriting this post. I was paid as a member of the Clever Girls Collective, but the content is all mine. Visit http://moms.dailybuzz.com/channel/style.

Finally, after enough rain to make us want to trade in the mini-van for an ark, fall as we know it and love it has arrived.

Lots of sun, lots of leaves, and especially today, lots of play.

And what I realized after the kids and I spent some time in the car this morning, driving the troops back from a weekend at my parents’ house, was that we all needed some outside time.  The sun was shining, birds were singing.  More than anything, we had to be outdoors.

Maddy, Owen, and Cora are all beyond the tricky baby and toddler stages, when they needed to be constantly watched or they needed a hand so that they didn’t fall off of the playset or knock their teeth out on the steps.  But they’re still at a tricky stages nonetheless because though they think they’re getting oh-so-much older and wiser, they’re still really young.  And they still really need to play.

Every single day, they need to play.

They need downtime, totally unstructured, free-bird play time. With each other and with their friends.

And for the amount of time they spend in school, they really need outside time. Every single day, they need to be outdoors.

So today after we got settled in the house, we put on our shoes and hung out out back for a good, long while.

I love what Elizabeth Jones said in “Playing to Get Smart”, (NAEYC’sSpotlight on Play): Children at play are constructing their own rules and learning at their own rates. As they test hypotheses and argue them with peers, they gain confidence in themselves as learners rather than becoming afraid to make mistakes. Children at play are learning to deal intelligently with the world. They are playing to get smart. 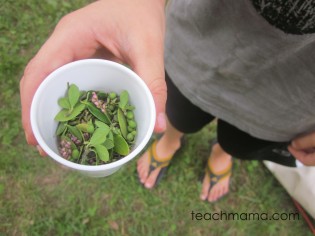 Owen’s ‘salad’, especially for me.

And they are. They’re making potions, soups, and pies out of beads, leaves, and dirt; they’re juggling the dynamics of family when they pretend to be a mom or dad; and they’re problem-solving when trying to figure out whose turn it is to swing, pitch the ball, or wear the pink boa.  All of these play elements help our kiddos develop important and necessary life skills.

Jones goes on to say that “success in our rapidly changing world depends on being able to think creatively and quickly” and that play is a “mode of response to experiences” that must be taught in early childhood education.  She says, We teach young children to play by providing them with space, time, and materials; offering them support in problem solving; presenting new problems for them to solve; paying attention to their spontaneous interests; and valuing their eagerness to learn about the world in which we all live together. 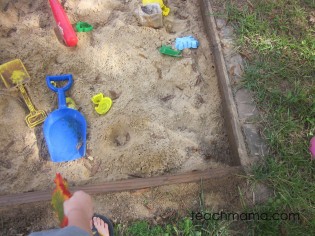 So today that’s what we did: we played. Maddy, Owen, and Cora played out in the back yard, pretending to be animals, then students in a school, and then a family getting ready to celebrate a birthday.

I watched, I listened, and I jumped in when Owen ‘accidentally’ gave Brady Cora’s new stuffed monkey, and I joined them for a sandy, grassy birthday cake.

And I realized that not only was this playtime so important for my three kiddos, but it was imperative to my well-being, too.  It was important to my health and to my happiness to be outside with them, enjoying the fall breeze and secretly listening and laughing and wondering where these crazy and creative kids came from.

It has to be a fixed part of my daily, natural ‘beauty’ routine, if you will–being outside each day, especially during the change of seasons.  If even for a short bit, being outdoors with my kiddos allows my mind to clear, my body to move, and my soul to breathe.  And when my kids are playing freely, contently, my heart sings.

At least until someone interrupts the peace with a scream or a poke or a yelp or a cry, right?

And really, that’s it for today–just a little bit of nada. Outside, free-bird playtime. Just what the doctor ordered.

Thank you to Walgreens for sponsoring this blog post. I was selected for this sponsorship by the Clever Girls Collective. All opinions are my own.