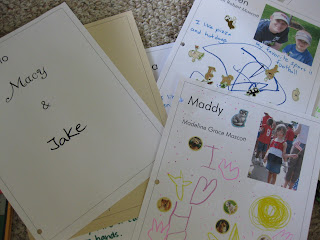 Today we wrapped up what was supposed to be a month’s worth of work but what we actually shoved into four days. Nice.

Maddy, Owen, and Cora finished their pen-pal package for their new buddies in Texas–Macy and Jake. We are a part of the Super Summer Swap, coordinated and organized by two very cool gals, Christy and Denise.

We have been practicing our writing all summer in games and letters to our local pals, so this was a really big-for-us extension of the little things we’ve been doing. It’s a great way to wrap-up some previously touched on skills, and I can’t thank Christy and Denise enough for their great idea.

On Tuesday, they bought a book for both Macy and Jake at the book booth–a book re-sale event at our local hospital’s annual fair and which just so happened to be Tuesday. It was only about 800 degrees, hazy, hot, and humid outside, but they managed to find interesting books in great shape that they thought their pals might enjoy.

We also worked on the computer on Tuesday on the layout of the letter part of the package. We made it like a book; it contains a Table of Contents and a page each about Maddy, Owen, Mommy/Daddy/Cora, Golden & Guinea, Our House, Maryland, and Friends. They chose the pictures for their pages, Cora’s page, and the Friend page. 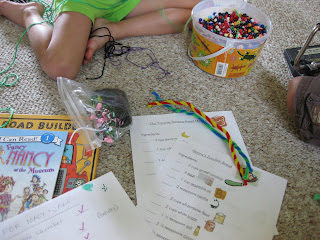 On Wednesday, since they decided that their favorite toy was the balloon launcher, we all went to our favorite local toy store and picked one up. This would be the exciting part of their package since these guys aren’t cheap.

They also worked on their letters. The excitement for our impending trip to the shore was palpable over here by mid-week, so Wednesday is when things became more difficult. Owen scribbled on his sheet and said he was done. Maddy wrote that she loved horses but I never heard her say that in all of her life. We were slowly losing our minds, the package needed to get out by the weekend, and I had a hundred loads of laundry to do before then. Gulp.

On Thursday, Maddy and Owen posed for pictures for the house page of their book and dictated to me what they wanted to have written on the pages of their books. This was fine with me; sometimes writing is intimidating for little ones, so having them say what they want written with someone else composing it is a great alternative, especially when their minds were already on other things (ie., sand and surf).

Friday was the day that we put everything together. Maddy put the pages in order. They chose the colors for the pipe cleaner binders. They also wanted to make bracelets (or a snake and a keychain) for Macy and Jake, so they worked with beads and completed those today. They also wanted to include some of their favorite recipes, so we threw in our muffin recipe and our more recent zucchini bread one.

Saturday the package will hit the Post Office, and it’s off to Texas!

We’re hoping that Macy and Jake–and their awesome mom, Sarah–enjoy the package, but we want to send a disclaimer along: BlogHer made a mommy tired and the beach caused a major distraction. Next year, we’ll plan better.