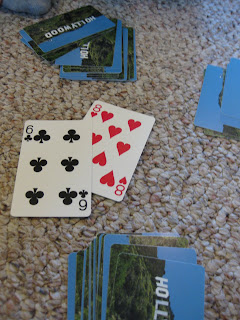 For the last few months–yes, months–Owen has been obsessed with playing War.

With any deck of cards, anywhere, any time.

It’s probably safe to say that we play the game at least ten times a week, with any pack of cards that he can get his hands on.

So my little boy is fast becoming a number whiz. And war? A secretly worthwhile game. . .

First, we take turns counting out our cards, crossing our fingers it’s a full deck and we each have 26. If it’s not, we just make sure we have the same amount.

Then we flip the top card at the same exact time, and the higher number wins. That’s it. Winner takes both cards and puts them in a pile. After each original pile is gone, players use the pile of cards that they won. 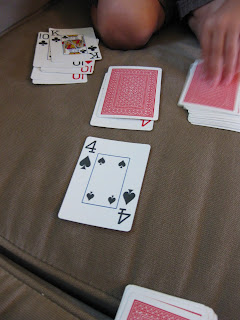 The big excitement of the game? When players flip the same card–then it’s WAR! Players put two cards face down underneath the “war” card, then they flip a new one, and the higher number is the tie-breaker.

The winner gets to keep all of the cards, including the two “surprises” that are face down. 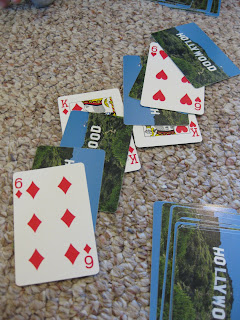 Talk about crazy–it’s a double war!

When we’re really feeling nutty, we’ll play triple war or quadruple war and add others to the game.

Tons of variations of this game exist, and almost everyone I know has played one of them before. I think it’s a game that we might put off until later, or we simply underestimate its learning importance.

As a Reading Specialist, I always forget about sneaking in those important math concepts, but I’m continually learning and always trying. This game–as super simple as it is–really is worth adding to anyone’s game shelf.

That’s it for today. Another rainy afternoon playing War for a short bit before Owen’s rest time. Thought it was about time I shared it. . .

Previous Post:tutor me happy
Next Post:new for us friday–disney digital books