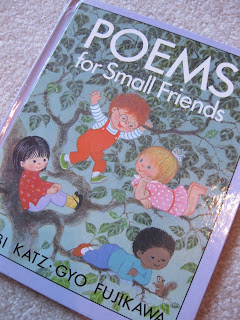 Today we did some of Maddy’s “Kindergarten Work” from her summertime calendar. Lucky for us, we were able to use some of our most favorite books in the house:

I read the activity to Maddy and Owen (who’s along for the ride), and the first thing we did was to go on a search for our poetry books. Then I grabbed two small white boards and some markers. My kids love to use these, and it always gets them writing.

Our favorite poetry books are:

Poems for Small Friends, by Bobbi Katz and illustrated by Gyo Fujikawa
(We love, love, love this book–the illustrations are simple and beautiful, and the poems are sweet and memorable); 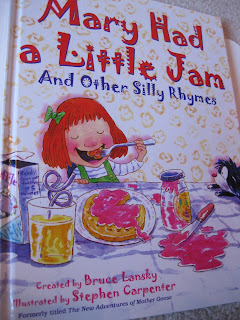 Mary Had a Little Jam, by Bruce Lansky
(Fun, silly takes on the old standard poems, this collection is awesome. All of those meaningless rhymes we memorized as kids should be wiped from our memories and replaced by these new ones–they are silly, kids love them, and it’s about time someone re-wrote ’em!); 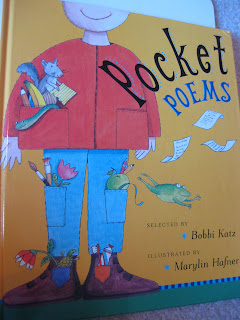 . . . and Pocket Poems, by Bobbi Katz
(Short poems that are easy for children to commit to memory, these poems vary in structure and style, as it is a collection of many different poets’ work. The goal here is for kiddos to “own” some poems–to “. . . keep a poem in your pocket and a picture in your head, so you’ll never be lonely, at night when you’re in bed. . .” )

Once we found the books, I asked Maddy and Owen to each find two poems they wanted to read. This is always easy for them because in all three books, each poem is accompanied by a picture. A picture with each poem makes it easy for children to visualize what’s happening in the poem and helps them make connections! I love it! Maddy chose “Mary Had A Little Jam” for her focus poem, and after I read it–and she recited it from memory–I asked her to pick out the words that rhymed.

Being such a short poem, it wasn’t too hard. She said, Waffle and awful are two rhyming words.

I said, You’re so right. Great listening. Now I want you to try to point to the words. Can you point to ‘waffle’ or ‘awful’? (Always give a choice!)

She found “waffle”, and I said, You’re right! How did you know that is the word, “waffle”? I wanted her to explain to me that she knew the beginning sound and the letter that made that sound. Having her explain it firms it up in her mind and shows me that she’s making that connection.

We did the same for ‘awful’, and she wrote that word as well. Then I re-read the poem and asked if there were any other rhyming words. There weren’t, so we moved to her second poem: “Little Miss Muffet”. 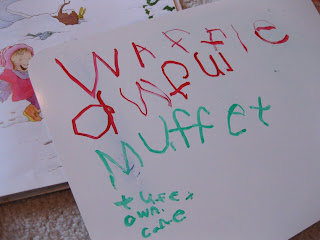 She was ready to roll with this one, and she picked out the rhyming words immediately. After she wrote “tuffet” I asked if she knew any other words that rhymed with “muffet” and “tuffet”, and Owen yelled out, ‘Puffet’, ‘fluffet’!

She didn’t want to write them because she was already writing ‘own’ and ‘cone’, to which she added ‘bone’, ‘fone’, and ‘lone’.

When writing the rhyme words, I really let her write phonetically. She stuck with ‘-one’ and added a ‘b’, ‘f’, and ‘l’ and then we were finished. 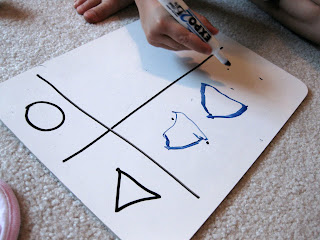 Owen also chose some poems, but his were from Pocket Poems, and, rather than have him write his words, I had him work on shapes. He’s still struggling with making squares and triangles, which are pretty good starting points for early writers, after the ‘x’ and ‘o’, which he has down by now.

On his board, I made two columns with a shape at the top, and if he needed help, I made dots for him to connect. We did this a few times, and then our work was done.

And that was it–quick and easy fun poetry reading and rhyme writing for Maddy and poem reading and shape drawing for Owen.