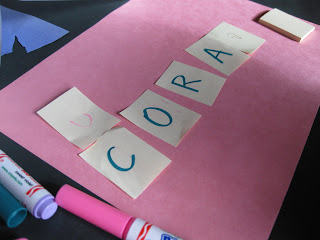 As Cora and I sat at the dining room table, coloring and chatting while Owen was at school yesterday, we worked a little on her name.

She was drawing tiny pictures on small Post-It Note sheets, and I was trying to organize the mountains of papers that had recently found their way to our table. After I watched her color on her “tickets” for a bit, I decided to jump in and use some of them to play with the letters of her name.

I said, Cora, here are the very special letters of your name–C, O, R, A. Let’s say the letters together. C-O-R-A.

Right! Here is your first letter–C. Will you move it down here for me? 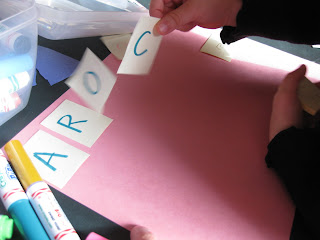 Cora’s letters are all mixed up…

Next, I said, Your next letter is ‘O’, which is Owen’s letter. Is this an O, or is this an O? Then, Which one is your ‘R’ and which is your ‘A’? Right. Now let’s put the letters in the right spots so your name is spelled!

I’ve talked about giving children choices before; rather than set them up for making a mistake or asking them a close-ended question, I’ve always learned that having them make a conscious decision about their answer is the best route. 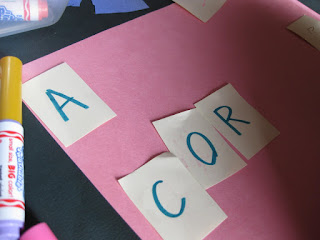 ….she only needs the ‘A’ and she’s spelled her name!

After her name was spelled and the letters were in the correct order, I mixed them up again, and each time she put them in order, I facilitated less and less so that the last time we did it, she did it on her own correctly. 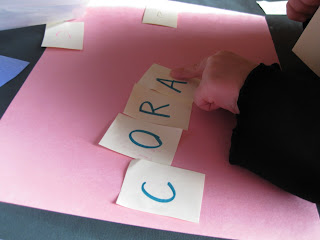 Cora puts her letters back in order.

And any games we can play with “their” letters–whether it’s re-arranging magnetic letters, letter blocks, or foam letters in the bathtub, helps them learn this lesson in a fun way.

And that’s that. It’s a busy month of celebrations for us, with Maddy’s birthday and the Christmas holiday, so any teeny-tiny bit of learning I can sneak in–when I’m not sweeping tinsel off of the floor or scrambling to make treats for this or that–makes me happy!