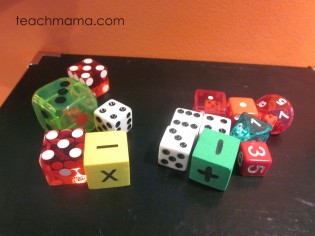 Somehow we have ended up with a ton of wild and crazy dice in our house.

Some are old; some are brand, spankin’ new.

Some have numerals and some have dots.

Some are even double-dice–a big die with a mini die inside.

And we had one die with an addition, subtraction, multiplication, or division sign on each side.   One, that is, until I made a second using one of our cheapo foam blocks from the dollar bins.  A Sharpie and a foam block, and we were set–much like the die we made for our Ghost Bingo back in the fall.

Since we’re continually working on good, ole-fashioned math facts over here (one kiddo reluctantly and another enthusiastically), I tried to mix it up a little the other day and utilize some of our oh-so-crazy dice for some fun. 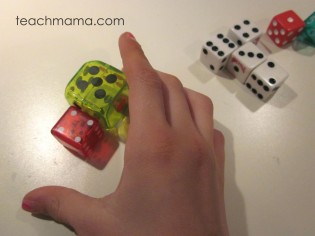 two of our cra-zeeee dice, happy to be found and used for some math-fact practice

It was right after Maddy and Owen had finished their homework, on an afternoon when neither had very much to do.

Cora was busy painting, not to be interrupted, so I said, Wow. We have a ton of dice here. (I had just started organizing a supply box in the work room.)  Let’s use them for a little game. Who’s up for it?

Owen–without hesitation–was up for it, and Maddy took some convincing.  But because she was the one I was thinking about who could benefit from the extra mathy-math–fun, I pushed a bit: Oh, Maddy, Maddy.  This game I’m thinking of is CRAAAA-ZY fun.  She was in.

Very quickly, I made the extra die with the process signs.  Then I said, Awesome. Here’s the deal: We’re going to start out by taking turns choosing two dice. We’ll roll the dice and then roll this die (pointing to the sign one).  Then you can decide what order you want to put your numbers and you can figure out the answer to the problem. Like this. . .

I chose two of the red dice, and I rolled them.

A six and a two, I said.  And then I rolled the green die I made.  A plus sign! So it doesn’t matter which order I put my numbers, because the answer will be the same, but I’m going to create my problem like this: 6 + 2.  And the answer is eight. Yay! Simple. Who’s firs

Owen grabbed two dice and rolled them. And then he rolled the green die. And very quickly, he declared the problem and gave us the answer.  I can’t even remember what it was, it all happened so quickly.

And then he chose the crazy double dice and added those numbers together and used that as his second number. It’s fun for him, and it comes so easily.  It amazes me because my brain is not programmed that way; I have to move more slowly, and I’m thirty years older than he.

By that time, Maddy was just about ready to take off when I said, Okay Maddy, here you go. You do your own, and Owen will do his own.  No contests, no stress.  Just choose two dice, roll ’em, and then roll to see if you’ll be subtracting, adding, or multiplying. Since you’ve started multiplication at school, you get to try that with this game.

She and I worked together a little more closely for the first few times, and soon she and Owen decided to morph the game into a seriously insane-combo game where they rolled three number dice and the two sign dice and worked together to figure out the answer.

And it was quick, and it was a fun–easy–way to throw in a little, teeny bit of math fact practice after homework was finished, before dinner started, and before we moved into the next part of our day.

Need more quickie, on the fly math games for kids? Check out: 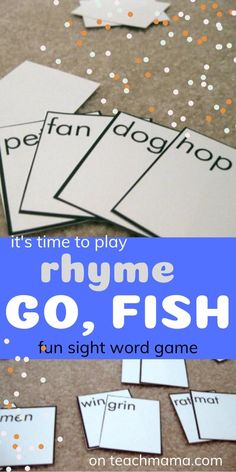