questioning and critical thinking: guess who? 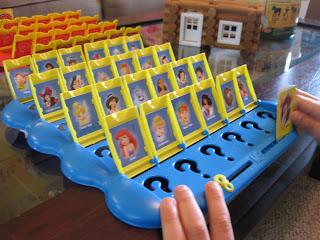 I totally forgot about one of my all-time favorite games until this past weekend at our neighborhood yard sale when we scored big with re-sale games— Guess Who?

I remember loving the faces, the cards, the simple strategy that the game required way back when I was little. My sisters and I must have played our Guess Who? game 100’s and 100’s of times. So I was psyched to find a new edition for Maddy, Owen, and Cora, on sale for a whopping $1.50!

Our new and totally fancy Guess Who? is the Disney Edition, which I think will make the game even more exciting for my kiddos, especially because they’re on the younger end of the age-level for the game. Playing it for the last few days with the kids gave us a super opportunity to practice questioning and critical thinking. 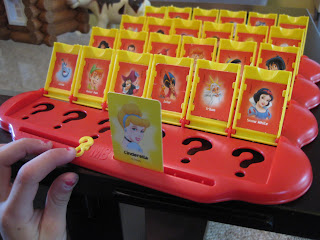 It was a challenge, and for the first few times, we played ‘teams’–Owen and me vs Cora and Maddy. Then when Cora was ready to move on to Lincoln Logs, Maddy and Owen played, and I just ‘coached’ each of them.

I found that if I modeled the first few questions, they followed my lead, and that was fine. We usually started with:

From the initial question, we really had to talk through the answers and next steps. Owen or Maddy would say, Okay, I asked if the person was a girl, the answer was ‘no’, so that means I put down all of the boys, right?

It’s not an easy game for a 6 year-old and 4 year-old to play solo; I realize that now more than ever, but it really is great for getting brains moving. What a great challenge to generate questions and then produce the language it takes to ask a question that yields a “yes” or “no” answer! 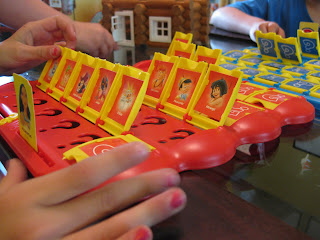 Maddy vs. Owen, with Cora as a Lincoln Log-playing spectator.

By the time Maddy and Owen were down to only a few cards left standing, I’d ask them questions to prompt their next question: What is the difference between the three people here? What do these guys have in common? What can you see that this guy has but that these three don’t have?

It helped a bit, but more than anything, but I found that the hardest part was to let go a little (Gah! Isn’t that always the case?!). Several times, Maddy or Owen just started flipping the wrong people after they got an answer which meant that they would never find the ‘mystery card’. I held my tongue and watched them go down, but (I think!) it made them listen more closely and think more carefully for the next few times.

We’d go back and try to figure out where they made their mistake, but they weren’t always that interested. They were ready to pick their next ‘mystery card’ and move forward. . .

So that’s it–a little bit o’ love for an old game, new to our family.

Need some Yard Sale Look-For’s so that you’re catching all of the best toys for your kids? Check out: What You Need From Local Yard Sales.

With the next few sunny days ahead, I anticipate busy afternoons outside filled with scooting and bike riding. And after this rainy streak, I know we’re all looking forward to it!