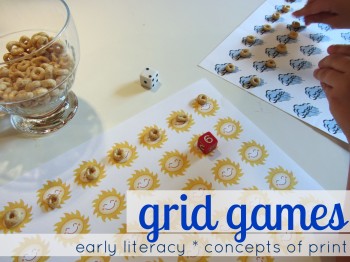 It’s been a busy few days for us, but we’re slowly getting back to the routine, and it (gulp!) feels pretty good.

Though boy oh boy do we miss Disney. . .

So this week, I pulled out Cora’s Kindergarten packet (wah!), looked through the ideas, and reminded myself that I really should do some more focused activities with her, even if only a few times a week.

Usually I try to give Cora some major flexibility and choice during work time–that sacred 20-30 minutes after we pick up Owen and Maddy, after snacks, when we all sit down together to cover school work.

If Cora wants to paint, color, or sort, I encourage her to go with it. If she’s up for puzzles or word searches, she does it.  If she wants to freely create a masterpiece, she creates.  But as the days and weeks until my 5-year-old walks into the doors of Kindergarten quickly approach, I’ve tried to narrow her choices a bit.

So I grabbed one of our faves this week–grid games–hoping that they’d be quick, they’d be easy, and they’d be fun for her.  (And secretly give her a chance to practice that ever-important left to right return sweep. . . )

Which is why I really love them. 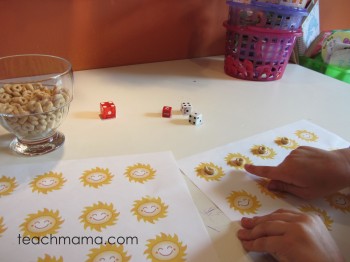 We used our sunny rainy grid games which can be downloaded here and printed if you’d like.

It was a gorgeous, sunny day, so I thought that though we were blue about our vacation being over, the smiling sunny faces would lift our spirits.   And we used Cheerios to cover our board because it was snacktime.  And we were both hungry.

The concept of Grid Games is simple: cover the board in an organized, left-to-right return sweep fashion, the same pattern we use for reading.

And the goal is to be the first one to cover your board. Simple! 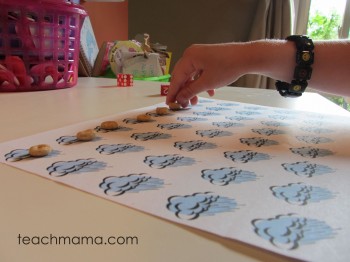 We have used dice–with dots and numbers–flipped playing cards, a handful of beads or beans, and magnetic numbers pulled from a bag as our ‘counters’ and we’ve used a ton of things as our board markers: 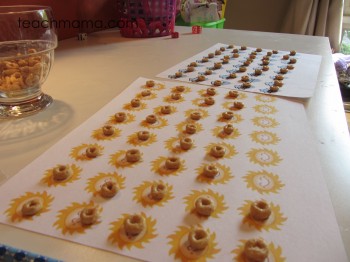 It didn’t matter what we used as our counters because my focus for Cora was more on the literacy end.   I wanted to make sure she was starting at the left and moving toward the right and then returning to the second line and doing the same thing.  The last few times we used Grid Games, she was all over the place, refusing to follow the left-right return sweep, so I was crossing my fingers that she’d go with it this time.

So while Maddy and Owen finished their work, Cora and I played, and once our boards were covered, we ate our Cheerios.  And we were finished! Just like that–and she had no idea how important this little game was for helping her to read. . . and that’s totally cool with me.

There are a ton of other fun ways of helping kids learn the left to right return sweep, but if you want some more super-fun, super easy Grid Games, check out: