Originally published 12/7/09 but republished today because, well, it’s worth it– 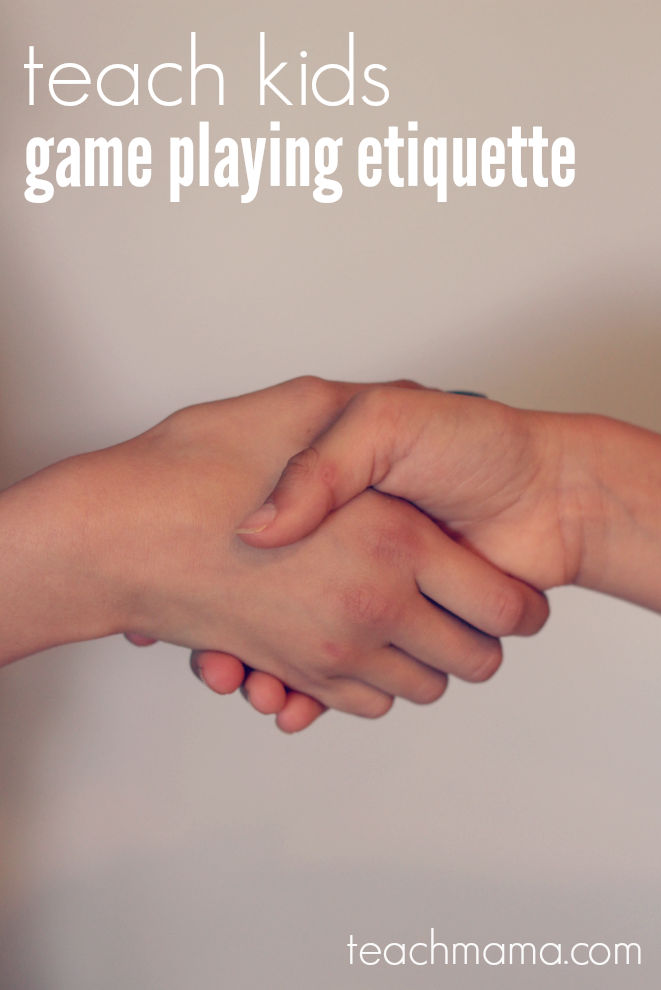 When I first started teaching, in order to make ends meet, I ran several after-school activity clubs at an elementary school near the high school where I taught.

I headed anything from Craft Club to Calligraphy Club to Board Game Club to Chess, Checkers, and Mancala.

I ended up doing about a million sessions of Chess, Checkers, and Mancala because the same group of kids signed up for every single session for three straight years.

What I learned–among many things–is these little “gamers” were skilled at the games but were not skilled at game playing etiquette.

They knew the rules, but not that they couldn’t be sore losers or no one would want to play with them next time. They could talk a good game but cried when the first guy jumped his king. All I needed was one big, unstoppable, messy, dramatic (and I mean dramatic) tear-fest with a few first, second, and third graders before I knew something needed to change.

So I organized detailed tournaments to guide their games, but I also set up two specific rules that every little player needed to follow. And that’s today’s Quick Trick.

So recently, I’ve had to enlist my old ‘Chess, Checkers, and Mancala’ rules on my own little ones, and it takes a lot of practice. It’s a work in progress.

Here’s the skinny in two steps:

1. Before games begin, everyone shakes hands, looks directly into their opponent’s eyes, and says, Good luck.

2. At the end of the game, same thing: players look directly into their opponent’s eyes, and–win or lose–they say, Good game.

For my Chess, Checkers, and Mancala guys, if they forgot a step, the game was declared null and void, and an immediate re-start was in order, no matter how far they were in the game. I had to witness each handshake to make the games official. (Gosh, I was tough.)

With Maddy, Owen, and Cora, I haven’t been that hardcore, but usually someone remembers before we start.

And yes, these messages might seem cold, impersonal, and forced, but my intention was to get the players to look at each other and touch each other so that they remembered they were playing with a peer and not their parent (who might usually let them get away with this kind of behavior).

I also knew that some guys did want to cry at the end if they lost, so ‘good game’ might be the only thing they could manage to say.

It’s certainly not an instant remedy for sore losers or bratty players, but I think–hope–pray?— it may be a step in the right direction. Only time will tell. . . .

Until then, good luck!