Blends are so tough for some kiddos to grasp, and my intention for working on s-blends with Owen was not to frustrate him; rather, I hoped to help him with his pronunciation of s-words.

We’ve played this S- Blend Bingo from Bear’s Words Their Way (2004) many, many times since the summer, and finally–finally!–Owen told me he was going to ssssscchhool last Wednesday morning.

Not ‘foool‘ like he had been saying. Nope. On Wednesday, the stars were aligned, my boy was ready, his mouth and his little muscles were ready, and something clicked!

He was able to say, without any prompting from me, ‘school‘ correctly. Woo-hoo! He was so proud. And we danced and whooped it up all through breakfast.

So to celebrate–of course–we played S- Blend Bingo on Thursday afternoon. We had to. (And the weekend was so busy, I’m just sharing it now. . . ) 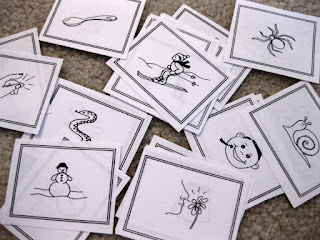 Sometimes when we play, we use the cool, red and green clear plastic bingo chips, and other times we use the glass beads, Cheerios, marshmallows, or Foamies. I try to mix it up.

Since my purpose was pronunciation, before we started this game, we went through all of the picture cards and took turns identifying them. The first few times we played, I would identify the picture, then I’d have Owen repeat it. I wouldn’t correct him when he mispronounced words; I would just pronounce the word and have him try his best to say it. 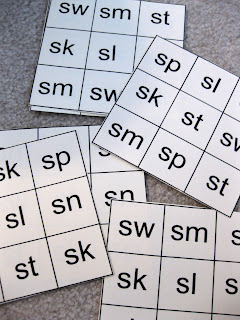 So we’d play it like any bingo game–flip a card, identify the picture, and put the chip on the s- blend square on the board that matched the picture.

This was not an easy game for Owen, since it requires players to do three things: listen closely to the sound after the initial s- sound, identify the sound, and then mentally connect that sound to a letter. But we talked through it, laughed at the pictures and practiced making the sounds.

And that was it. We played a few times then Owen headed over to his Rescue Heroes to save the universe from another fire or earthquake.

Just another sneaky, teeny-tiny, little shot at learning and practicing for us, disguised as a game. Thanks again, Words Their Way!