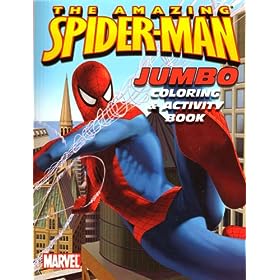 One of our local drugstores was almost giving coloring books away a few days back, so I picked up a few. This morning before we headed off to open gym, we had a few minutes, so I brought out three. Maddy and Cora got right to coloring, but the The Amazing Spider-man book I picked up for Owen was more of an activity book than a coloring book–it had mazes, word searches, tic-tac-toe boards–all of which were great but were too tough for a 3 year old. So, we made up our own activities, and here’s how we gave Owen’s Spider-man Activity Book a Makeover:

Instead, I wrote OWEN on the side of the page and had Owen go through the letters and circle the letters of his name. I modeled for him: Hey! this looks like an awesome game. Let’s do it. First we’re going to look through each line of letters for the special letters in your name. Look at this line of letters. (I slowly used my marker to go through the line.) O, O, O, where is an O? Here’s one! I’m going to circle it. I went through all the lines, then when I was finished, I put a check by the O in Owen on in the margin. I started with W then handed the marker to him. He circled all of the W’s he could, then put a check next to it. He did the same thing for E and N.

He had such a fun time with this little game, he did another puzzle searching for MADDY and another searching for CORA. Sure, it’s not the correct way of doing it, but it worked for him. Not to mention that he worked on making circles and check marks along the way. This could be done using any word search at all–and any words you choose to write in the margins.