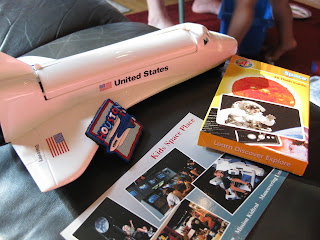 Literally, the minute Maddy and Owen woke up after returning from the OBX, they first ran to check on Golden and Guinea, and then they hit the dining room to check on their big box from Texas.

They worked so hard on their package for their penpals, so they were very curious about what might be included in the letters for them.

Add a few postcards, a letter, chalk, and a Lightening McQueen lollipop to the mix, and my Owen was in heaven, ready to book a ticket to Texas to visit his new buddy. 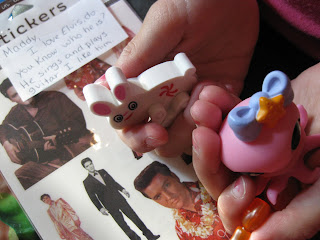 Maddy’s letter was more like a tiny book with pictures drawn by her penpal and little notes throughout. It was perfect for Maddy, as was the Tiny Petshop Octopus that was included; she literally sang and danced she was so happy to open it.

She, too, opened a cool chalk holder, Elvis stickers (no joke!), postcards, and pencils–all totally had Maddy hooked.

Little Cora was also kindly included in the package–a small, divided Texas plate was for her, and she loves having something special to use at meals and snacks.

Thank you so much to our penpal family at Digital Reflections!! 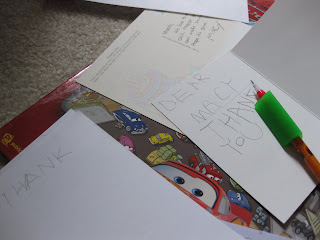 Today, Maddy and Owen worked on short ‘thank you’ notes for their penpals. We kept them simple, and although they didn’t feel up to writing much, I still think it’s important for them to get in the habit of composing short notes of thanks after they receive a gift.

I cannot thank Christy or Denise enough for coming up with the cool idea behind the Super Summer Swap.

Any authentic reason to get our little ones reading and writing–and researching and planning–for a purpose that genuinely interests them is what we ultimately strive for as parents and teachers.

At least that’s what this sneaky teach mama strives for over here, and I love it when my bloggy pals help me out in the endeavor!

the special plate: celebrate success as a family
Next Post:swinging and clapping