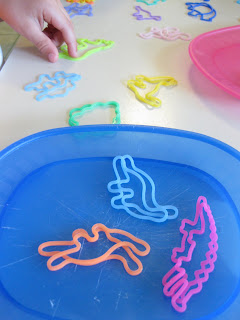 They’re animals, dinosaurs, princesses, vehicles, foods, toys, weather, and clothes. They’re on our floor, in backpacks, and on wrists.

They’re silly bands–rubber bands that people wear as bracelets but that keep their shape when they’re off the wrist. And like almost every parent in America, in my dreams I invented these sillier than silly bands, making me one richer than rich woman.

Maddy and Owen (and by default, Cora) have fallen into the silly band craze, so it’s only natural that their big, nerdy teach mama would sneak in some surprisingly important learning with their many, many, many silly, silly bands. . .

Since they come in pairs (most packs have 5 or so shapes with two of each shape), silly bands are a great way to practice counting by 2’s, and that’s what we did. 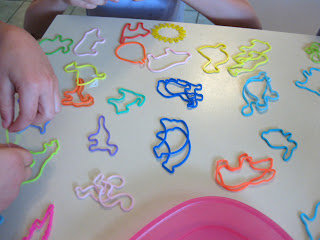 The silly band chaos had to stop; the pairs needed to be reunited.

Maddy, Owen, and Cora had been battling most of the afternoon over what shape belonged to whom and whose bracelet was whose, so I said, All of the silly bands are mine. Bring me every single one; we’re starting from scratch.

I don’t think they knew what ‘starting from scratch’ meant, so they all met me at the kitchen counter and brought me their bands. I put them into a huge pile, and clarified for them: There’s too much arguing over these silly bands, and it’s ridiculous. We’re starting from the beginning, handing out silly bands all over, and if this doesn’t solve the problem of which bands belong to each person, I’m taking them all away.

First I said, Okay, they come in pairs–there are two of each shape. So let’s find all of the matches and put them together. So that’s what they did. They sorted all the silly bands into piles of matching shapes. 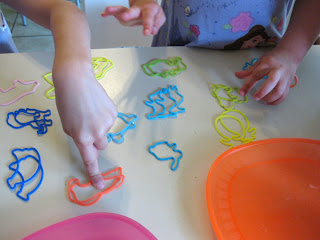 After all of the pairs were reunited, we separated the bands into two big groups: the pairs and the singles to make for easier counting. And I said, Let’s see how many we have. Look at how many pairs we have. These are all groups of two, and these are our singles. Let’s each make a prediction–a good guess–about how many we have total.

We all made educated guesses, and then Maddy and Owen counted off by 2’s and then added the singles. We talked about who came closest (Maddy), and then I asked them to make some observations about what kinds of silly bands we had, looking at the colors, shapes, sizes, and textures.

Their observations were so unique and interesting, and they were so reflective of each person–I realized I need to ask these kinds of open-ended questions more. We talked a little about what we had in front of us, and then we divided the silly bands, once and for all. Maddy chose one, then Owen, then Cora until there were no bands left.

And that’s it. They walked away with their tiny arms filled with rubber-band bracelets, everyone a little more at peace with the shapes on their wrists. It was a teeny-tiny bit of learning stuck into a silly band re-organizing session.

fyi: The ‘games’ we played with silly bands were short but sweet, but the color sorting, concept sorting, shape, and size sorting possibilities with these silly bands are endless. Have kiddos choose a handful of shapes and use them as story-starters, and you’ve got a great way of getting those creative juices flowing and story elements practiced!

One other pretty cool way that silly bands can help facilitate learning in our little guys is with trade and friendship etiquette. I was in awe just listening to Maddy and her buddy navigate the previously uncharted territory of trading, and I found that a conversation about how to politely trade something was in fact necessary afterward. Maddy and I chatted about how to initiate a trade and how to accept or turn down an offer. We talked about under what circumstances she should take ‘free’ bands the day she came home with a few ‘freebies’ a classmate gave to Maddy for “playing with her at recess”. Gotta love kindergarten.

edit–6/10/10, Here is one link for Silly Bandz for all of my across-the-world teach mama readers who’ve emailed me asking, Where on earth do you get those??!