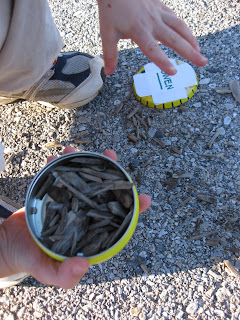 After having been covered in snow for the last seven days, we finally had a clear day to go outside and burn some steam.

So while my husband played college-guy and rooted for UMD in the stands this afternoon, I took the troops out for an “after-the-snow” hunt on a wet and soggy playground.

Lately, Cora has been doing what I remember both Maddy and Owen doing when they, too, were about 2 1/2–putting things inside socks, inside boxes, inside purses, inside whatever and carrying them all over their little worlds. And sometimes they lined up their treasures on their beds, displayed them in a “fort”, or just organized them in any small space.

I read in my What to Expect. . . that some kiddos do this simply because they can. So rather than fight it, I thought I’d run with it today:

I had four empty ones, so I taped up the lids, wrote their names on each and said, It’s sunny! It’s cold, but let’s go outside! You can ride your bike or scoot up to the park, and once we get there, we’ll go on an ‘after-the-snow’ hunt for teeny-tiny treasures that fit inside each of your teeny-tiny tins. Here you go.

These are especially for you, and once we get to the park, we’re going to see how many tiny things we can squeeze into each of our tins. When we’re finished, we’ll count and see who can fit in the most. Our hearts will be so happy to finally get some exercise. Let’s go–

They played with the lids for a while–Cora, the no-napper–got pretty frustrated and needed help the first few times; they really are tough for little hands. Then we went on our way. 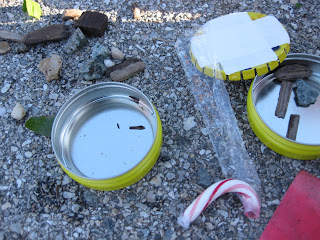 Cora and my tin was full of all kinds of surprises.

But once we made it to the park, it was amazing how much Maddy, Owen, and Cora found when they honed in on all of the tiny things. Sure, some things were gross–a partially eaten candy cane–but other things were pretty cool.

We found some clean–and dirty–coins, some barrettes, teeny little flowers that somehow survived the snow (seriously!), pretty rocks, beads, you name it.

I hunted around with Cora, and when it seemed like we hunted for a while, we met at the circles, in a sunny spot in the middle of the blacktop, and we counted our teeny-tiny things.

Owen, my game guy, worked his little heart out filling his tin to the brim with anything and everything small, and he rocked it with over 60 items. Okay, so most were wood chips, but I never set a limit on how many of one thing a person could add. Little smarty. . .

The whole thing took only a few minutes, but it gave our trip some focus before we played, ran, scooted, hopscotched, and then took the path back home. 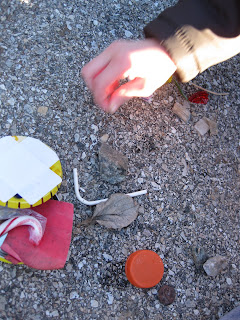 These kind of really simple activities that are presented as a game are super important because they can deal with important mathematics concepts that our little ones really need.

Children “enjoy talking about large numbers even if the numbers are not understood,” (from Copley’s The Young Child and Mathematics, 2000) so this activity gives them a chance to really see what those big numbers can look like: Sixty wood chips can fit into Owen’s tin? Wow! Then can you imagine how many wood chips we have in our whole park?! Can you even make a guess?

There are a ton more places to take this simple activity, and we just may do that next time:

So that’s that–just a tiny bit of outside math learning for us today!