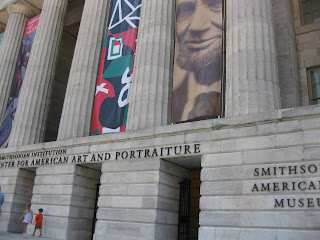 I have always been intrigued by Norman Rockwell’s artwork.

When I was young, his Girl at Mirror (1954) spoke to me so personally about the battle between growing up and embracing childhood. Looking at the girl with the picture of a model on her lap and her doll on the floor, I knew I wasn’t alone in my conflict.

Others like Marble Champion (1939), Happy Birthday Miss Jones (1956), Good Boy (The Little Orphan at the Train (1951), and The Problem We All Live With (1964) conveyed so much emotion in one frame that I remember staring at them for hours in my parents’ huge Norman Rockwell coffee table book. Stories and questions ran through my brain. I wanted answers; I wanted to know more.

So in June when I read the article in The Post about the Rockwell exhibit at the American Art Museum this summer, I knew I had to take Maddy, Owen, and Cora 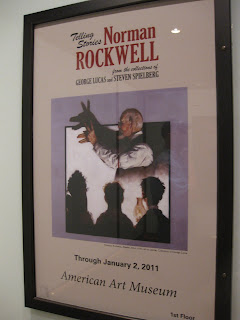 down to see it. I knew if the paintings struck me, then they’d most likely also strike my kiddos, even though they’re young. And talk about great story-starters. . .

I tried to explain that the boy wasn’t a real boy but rather a character in Norman Rockwell’s painting. There was no real, correct, absolute story, and the cool thing about Norman Rockwell’s artwork was that he painted so well they looked like photographs and that the paintings told stories. Stories that we got to create and tell for ourselves.

A few weeks passed, and between swim team, weddings, baby showers, and long weekend trips, Rockwell’s paintings went on the back burner. Then we found out that Maddy was going to have her tonsils out this week, so we decided to jump on a free summer afternoon, take the Metro to the Smithsonian American Art Museum, and check out the exhibit first hand on Tuesday.

We prepared by taking out a few books from the library–Norman Rockwell: America’s Best-Loved Illustrator by Joel Cohen (1997) and Norman Rockwell’s America, published by Abrams (1975). 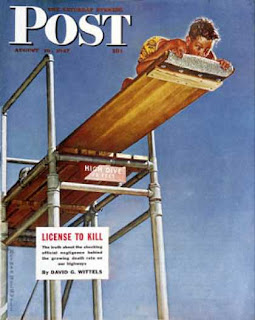 “High Dive” (1947) from the cover of the Saturday Evening Post
is in the collection of Steven Spielberg and on exhibit at
Smithsonian American Art Museum.

We didn’t pore over the books; Maddy, Owen, and Cora each 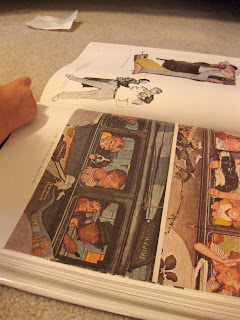 ended up flipping through them at different rest times throughout the week, and we talked a little about the pictures. Maddy hunted down the boy on the high dive, and they were happy.

But when we actually made it to the collection at the Smithsonian, we were all really overwhelmed and excited about seeing “our” paintings, the ones that the kids saw in the books and the ones I grew up admiring.

At the exhibit, we stopped to talk about the determination in the face of the little girl in Marble Champion, and we talked about who might be the champion. Could the girl beat those boys? How do they even play marbles?

We examined Happy Birthday Miss Jones, looked at her desk, and laughed at the trouble-maker with an eraser on his head.

We talked about the little boy in Good Boy–his fear, his excitement, his conflict–and we tried to figure out how his new adoptive mom might feel as well. We looked at the basket she brought for him and the other orphans on the train. We wondered how life would be for him when he went to live with his new mom. Would he have a dad? Would he miss his friends?

Maddy and Owen wondered why someone would throw a tomato–or anything–at a pretty little girl in a perfectly white dress in The Problem We All Live With and asked why she had big guys in front and in back of her. They wanted to know more.

Owen was worried about the boy and his dog in Waiting For the Vet. He asked what happened to the dog, where was the boy’s mommy, and why was the boy all alone. Were they in trouble? Why would a dog have a bandage like that? 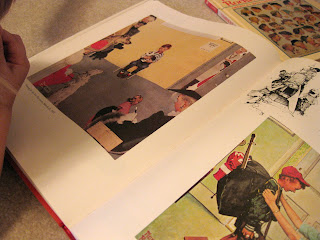 Bedtime books after the Rockwell exhibit? Rockwell books, of course.

We sat and watched the short film about Rockwell and the exhibit, and although Cora had the wiggles and went out with my husband, Maddy and Owen were more interested than I thought.

We didn’t stay too long–maybe 45 minutes or so–just long enough to get little brains moving and thinking and wondering. And when we finally sat down to read books at bedtime, everyone ran for the Rockwell books. It was awesome.

It was a long afternoon, so we didn’t follow up with anything other than very casual question-asking, predicting, and connecting. In the next few days–before the books are due back–I hope to:

No matter what we do–or don’t do–as follow-up, I hope sincerely that this week we instilled a little bit of art appreciation into our kiddos. Thanks to George Lucas and Steven Spielberg for sharing their collections.

Want some Rockwell but can’t get to a museum? No worries!

The Telling Stories: Norman Rockwell from the Collections of George Lucas and Steven Spielberg runs at the Smithsonian American Art Museum now through January 2, 2011. If you go, let me know what you think!