we heart alphabet board games Some of our most favorite learning materials have found their way to our home via yard sales, including these two alphabet and early literacy board games that we’ve played for the last three months straight.

Owen’s always been my “go-to game guy“, but recently he cannot seem to get enough of these simple–but worthwhile–games. And really, if my kiddo wants to play an alphabet or reading game, I’m not going to say no, especially if it means he’s just getting more sneaky learning practice. But I have to admit, I’m (gulp!) getting (just a little!) sick and tired of these two games. . . 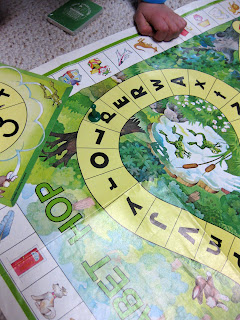 The premise is basic, and there are several ways of playing it, but we’ve been spinning, moving our game piece (which has ranged from a lego to a car to a block. . . ) that number of spaces, identifying the letter and naming one word off the top of our heads that begins with that letter. So easy. But for some reason, my boy has gotten a kick out of it. And there are pictures all around the board to help kiddos think of words, which I think is pretty darn thoughtful of the boardgame creators. 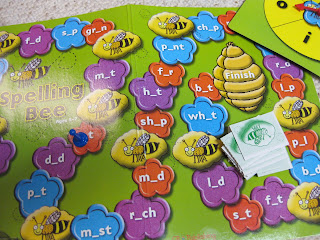 This game is a little harder than the above game because it takes literacy a step further; instead of stopping with letter-sound identification (the alphabetic principle), this game moves into more wild and incredibly exciting phonics principle.

Players roll a dice and move their game piece that many spaces. Then they spin, identify the letter that the spinner lands on, and then they have to put that letter’s sound into the word on the board. It’s tough. It’s requires looking at a letter, knowing the sound it makes, and then shoving that sound into a part of a word–it’s phonics at its finest, with its letter-sound correspondences and application of that information to reading and spelling. 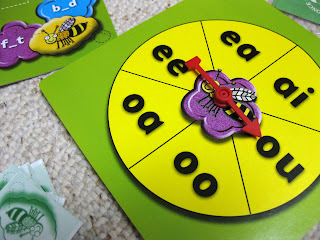 One side of the spinner has the short vowels (a, e, i, o, u), and the other has long-vowel patterns. We’ve played more often with short vowels, but Maddy and I have played with long vowels once only to find that it was really, really difficult for her. We flipped the spinner after our second or third turns. No big deal. I don’t plan to sell this baby back for quite some time, so maybe we’ll give the tricky long vowels a try down the road.

And that’s been our little sneaky, game-playing learning for the last few. . . well, way too long. And my purpose in sharing this was not to brag about these two games that I’m not even providing links for you to pick up your own (gosh I feel horrible about that!). Rather, it is to remind you: ’tis the season to grab some really good games and materials for some really good deals.

fyi: For the love of yard sales. . .
Check out our Yard Sale Look-For’s for all of the things a savvy teacher-parent should pick up for only a few bucks, come springtime sales. Sure, most families look for extra shelves and second-hand sporting equipment, but you can also find a boatload of educational tools you might otherwise overlook.

know where the offenders and predators are: family watchdog
Next Post: what you need from your local yard sales »