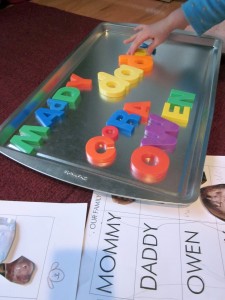 I try really hard to mix things up for Owen and Cora during homework time; some days they just color.  Some days they paint.  But at least 2-3 times each week I sneak in some specific literacy or math-related activities.

And if they express an interest in doing something fine-motor related, I’ll certainly let them go there–stringing beads, using chopsticks, hole-punching, cutting, anything. But for a good 10-20 minutes, we all just kind of chill out and have ‘work time’.

Last week, once again we were all about names during homework time–while Maddy and I worked, these two played with words and names.

Things were fine at first, but after about 20 minutes, they (okay, Owen) crossed the line.

I said, Okay, Cora. Let’s see if you can use the magnetic letters in this box to create the names of the people in our family.  Here’s your list. I’ll help you with ‘MADDY’. 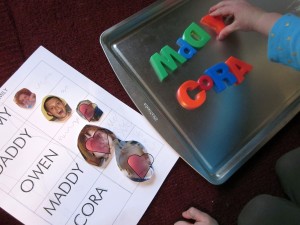 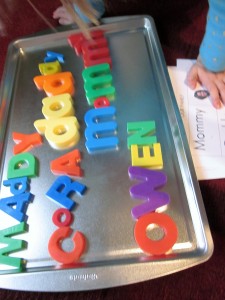 Can you find the ‘M’ or the ‘A’? She dug through the letters (which was hard, because it was a huge mix of uppercase, lowercase letters and numbers), and she found both. I showed her where to put the ‘M’, and she insisted she could do the rest by herself.

Occasionally I checked in on her, gave her a little help here and there, but she was right–she took her time–but she could find the letters.  When she was finished with the uppercase names, she said she wanted to try the lowercase names. While I was working with Maddy,Owen gave Cora a hand, and before I realized it, she had finished.

We talked through each letter, and I pointed at the letters on the sheet as I said them.  My pointing back and forth between the sheet and her tray helped her realize that she had ‘Mommy’ backwards. 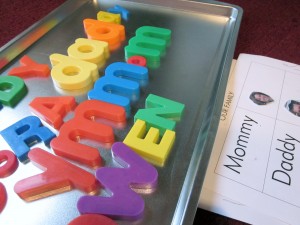 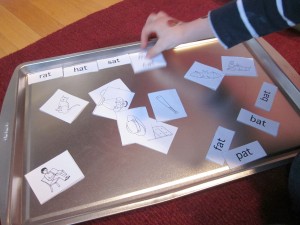 He did, and sure, sometimes he glanced at the picture to remind him–but that’s what early reading is all about–using what you know about letter sounds and the pictures on the page to help you decode words. I said, Great. Now let’s make it a little harder. Let’s take away the word cards and see if you can build the words using the magnetic letters.

He’s my game-boy, always up for a challenge, so he went for it.

But before I realized it what he and Cora were giggling at–while I was trying to help Maddy through fixing her sentences and playing with spelling words and drawing out math problems–my big-O pulled a 5-year-old boy on me: 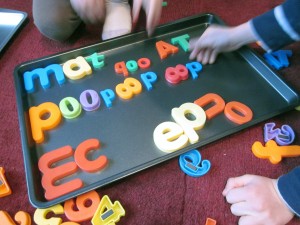 So really, work time fell apart quickly after this, which Maddy found absolutely hysterical. Owen was proud as a peacock that he made his sisters laugh so hard, and I just really tried to roll with it all.  Life is too short not to laugh with our kids, even when they cross the line.  . . right?

Though they’re both at different stages in literacy development, names are still a great place to begin with literacy, and once you get past names–like where Owen is at this point–it’s time to start work on word families.

Any of these posts can help make word play more exciting:

HUGE thanks to Bear’s Words Their Way for being just an all-around fabulous resource that I often lean on for activities during homework time, just like the picture/ word sort that Owen did on this afternoon.