Today I brought out another awesome resource from Bear’s Words Their Way. . . (2004), but it can be replicated very easily in a number of ways. When super-cranky Cora went down for her nap, Maddy, Owen, and I played this game; it can take as long or as short as you and your little students would like–we played a short version because, after all, Don’t Break The Ice was calling.

I took the egg halves out of the bag and said, Okay, today we’re going to play a quick game of Alphabet Egg Hunt. All of these eggs have lost their partners, so it’s our job to help them find their friends. Here I have a uppercase letter ‘A’. Let’s search for it’s partner–the lowercase ‘a’. Is this letter or this letter its match? (They were not, so I tried another two.) Hmmm, I just cannot find the lowercase ‘a’. Who can find it?

Maddy found it and reached for the uppercase ‘A’ and checked to see if they fit together. They 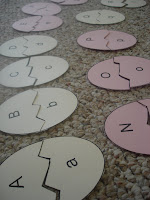 We did ‘B’ together, then I let them try to find some pairs on their own. They did well, but when I sensed a lull in their hunting, I’d pick up a letter and facilitate the finding of its partner.

After all of the letters had been matched, we put the letters in alphabetical order. This final step is a nice way of wrapping up the game, or you can skip it to save time.

Okay, I have to–this was an egg-cellent way of incorporating some letter learning into our day. Any way that we can reinforce alphabet learning is worth setting aside a tiny bit of time for.