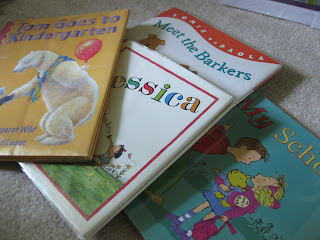 As we all know, there are a gazillion children’s books on the market that focus on beginning a new school year.

While looking at the library last week for new ones for us, I found four new titles that I am pretty darn excited about. They cover different aspects of school than the norm, and they seem to work well for my kiddos:

Moffie (the girl) tends to be an over-achiever, always seeking to earn gold stars and trying to answer every single question, while Morgie (her brother) and her classmates watch. DePaola does a great job–like always–of using his illustrations to convey the emotions of his characters, so readers can tell how Moffie’s classmates feel about her “hogging” the spotlight all of the time. Obviously, not too happy. . . 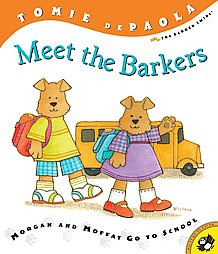 While she’s busy as the teacher’s pet, Morgie is busy making friends, and by mid-book, you can pretty much tell what needs to happen–Moffie has to learn to share the spotlight and make some pals, and Morgie needs to start talking to the teacher, or it’s going to be a long road for both of them.

They both figure it out, and, in the end, Moffie gets a best friend, and Morgie gets a chance to earn a gold star. It’s a happy ending, and–I think–a great way to facilitate a discussion about sharing the spotlight with others and meeting new friends in school.

Tom is excited for school, and he even shouts, “YES!” when he wakes up on the first day. But once he’s there, he doesn’t want his parents to leave–so they don’t. They stay at school with him that day, and they stay the next, until Tom strongly suggests they go home. His mom and dad and baby brother leave–reluctantly–but they do very silly things when they get home, mirroring all of the activities they loved in the classroom. 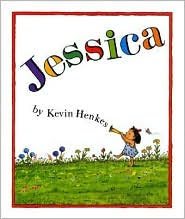 Ruthie doesn’t do anything at school to meet new friends; rather, she plays with imaginary Jessica. We talked a lot about how Henkes shows us how Ruthie really feels about playing with Jessica in school by the way he draws sad faces and slumped shoulders on her, but after she makes an effort to meet a new friend, Ruthie’s whole body clearly changes into a brighter, more alive little person.

My big Owen has a tendency to talk quite often about his own imaginary pal, so this book seemed a good fit for him. We are not discouraging his pretend friend or the stories Owen makes up about him, but we do want him to see how important it is to make friends in school and to have fun with them while he’s there.

Owen and Cora will share a school this year (okay, for one day a week. . . ), but I used this book to discuss how Tom’s behavior toward his sister was not okay, was not kind and loving, and how that behavior is not the kind of behavior that we show toward anyone, especially a family member–ever. But even though we used it as a teaching tool that way, it still worked to talk about playground behavior for Maddy and the idea of being kind and helping others when they need it.

Along with the other few–and very simple–things we’re doing over here to prepare for the new adventure that will be Kindergarten, these books also help to make the road a little less scary for Maddy–and even for the rest of us.

Previous Post: « preparing for kindergarten–the last week
Next Post: new for us friday–kiwi meets the cut and scoop »