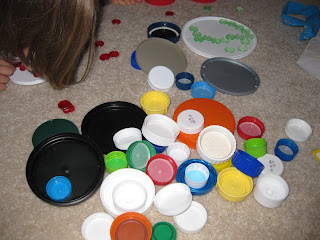 On this rainy afternoon, after Maddy and Owen’s last day of soccer, I put a super-tired Cora down for her nap, and I brought out two of Maddy and Owen’s faves and let them do whatever they wanted with them: bingo chips and bottle tops.

They played for a while, designing pictures using both, flipping them, stacking them, and organizing them. After a bit, I tried to sneak in a little math vocabulary:

A few days ago, I glanced at the math vocabulary that teachers incorporate through both Pre-K and Kindergarten, so I had a bunch of terms in mind that I tried to use today. (for example: more, less, equal, combine, compare, measure, predict, quantity, etc.)

Owen began to fill a small cap up with bingo chips, so I said, Owen, do you think that if you fill that top with chips, it will have more chips or less chips than this top? (I held up a larger top.)

I said, Okay, well, you’re giving me a big number. You fill your top with chips, then I’ll fill my top with chips. After they’re both full, we can count the chips and compare which can hold more chips than the other. 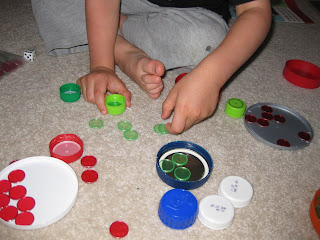 Owen, can you predict whether this top will hold more chips or less chips than the top you’re holding? ‘Predict’ means make a logical guess.

He said, I predict it will hold more.

We tried, and he was correct! He and Maddy predicted, counted, and compared some more, then Owen said, Look, Mommy, I can make a square! He moved his chips around and worked out a pretty decent square. We tried a few other shapes and then we decided we were done for the day. 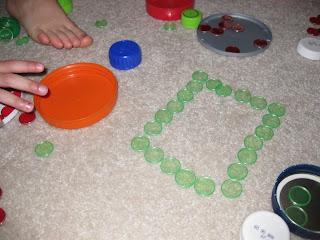 Some possible extensions or variations of today’s fun might be:

So much fun with things these guys love to play with and sooo cool to introduce new words to little learners, especially when they’re just playing around with rainbow colored tops and bingo chips.