A funny thing happened to me when I dumped out all of our Relay for Life donations on Owen’s bedroom floor the other day–I realized that I had never really talked to Maddy and Owen about coins and coin values. 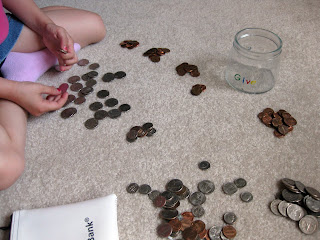 It’s suuuch a difficult concept, I know this and realized it quickly only minutes after I began, but it was a “teachable moment” of sorts, with me needing to count a gazillion coins and having two expert sorters right there at my fingertips. After they spilled out the contents of their “Give” jars to add to the grand total, they were totally psyched to organize the bills and coins and to count, count, count–regardless of whether they understood the values of each coin!

Here’s how it went:

So we dumped out all of the money, and after a few minutes of playing with the coins, we talked about the differences between them and the names of the coins that they knew. They knew pennies for sure–and they were pretty confident about quarters, but dimes and nickels were totally new to them. 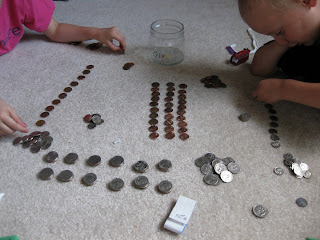 Lining similar coins up by 10’s. . .
We then began grouping the coins into like piles: pennies, nickels, dimes, quarters, and strange ones (.50 cent pieces, dollar coins, and really dirty ones). This sorting was not as easy for them when it came to distinguishing quarters from nickels, so we talked about the ways to tell the difference between the two (put one on top of the other–the smaller is the nickel, or compare the pictures on the front).

After the coins were all sorted into piles, we started lining them up by 10’s (pennies, nickels, and dimes) and 4’s (quarters) and counting them. It was great counting practice, and we checked and re-checked our work and made sure they were in straight lines to compare numbers.

Finally, I made a list and counted the totals for each coin. I wrote it all down and made sure I was correct, with their counting help of course. With totals accounted, we put all of the money in our bag and our now-empty Give jars back on their shelves.

Even though this was a simple activity, it helped Maddy and Owen with their sorting skills (which you know I could go on and on and on about), counting skills, early money-recognition skills, and a big-time life skill–giving.