We love grid games over here.

It doesn’t matter what’s on the board, what we use to count spaces, or what we use as place holders; my kids will play grid games any day, any time.

Don’t get me wrong–we don’t spend hours playing these games. They’re not all that exciting if you ask me, and there’s really no strategy involved whatsoever.

But grid games are great to pull out every few weeks–or month– for a little counting help, that one-to-one correspondence idea, and to practice the all-important left-right return sweep. The left-right return sweep mirrors the movement of words read on a page, so it’s a necessary concept of print all kiddos need to know.

Here’s how we’ve played with grid games–our new and fall-happy Leafy Grid Game after we’ve been picking up an old fave, Hats, Cats, and Pumpkins for the last few days!

The grid game fall leaves | teachmama.com are here to download as pdf if you and your kids are into playin’.

I added a maple leaf, an oak leaf, a ginkgo leaf, a birch leaf, and pine needles.

I wanted a different object in each column this time because the last time we played the Sunny Rainy Grid Game, I noticed that Cora got hung up with where to with her place markers, but she didn’t want to play with the ‘easy’ board. I was anxious to see how this ‘new’ version would go. 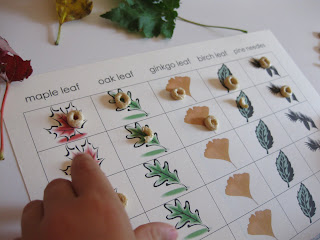 So while we were at the park this morning, I asked Owen and Cora to pick up five of the most beautiful leaves they could find. I told them we’d need them for a new game later that day. They really loved searching for beautiful leaves–it was a great way to move into the Leafy Grid Game later on.

I’m trying to have Owen and Cora play games while Maddy works on homework, and it’s haaard because Maddy wants to play our games. So Maddy joined us in round one, especially because it was snack time and our place markers were Cheerios and there was counting involved and we all just love having Maddy do anything with us when she’s finally home from school.

Before we got started, Owen and Cora matched up the leaves they found as best they could (we only found maples and some mystery ones–worthy of some research later this week!), and then we got rolling.

I had Owen and Maddy use the double dice–a large die with a smaller one inside. They added both numbers and then covered that many leaves on their board. Cora used a die with numbers 1-6 on each side the first time, and the second and third time she used a die with dots. I like the dot-faced die because it requires more counting practice, but with Cora, I try to go with whatever suits her fancy.

Maddy wanted in on game one. Hooray!

So we played a few rounds, ate a ton of Cheerios, and after round 2 3/4, Cora was d-o-n-e even though Owen could have played until round ten. Soon, though, he picked up his Hidden Pictures, and Maddy and I moved onto her spelling words and math packet, all before they played a crazy game of bug-city with our little plastic bugs and Maddy ran off to soccer practice with Coach Dad.

And that’s that–just a little bit of sneaky learning under the guise of a grid game fall leaves | teachmama.com.

Still working on how best to manage this new and nutty fall schedule, but we’re trying. . . just like everyone else, we’re chugging along, doing the very best we can.

Want to throw in a Grid Game now and again? Here are just a few. Read on if you really want to know why Grid Games deserve some love:

lowercase letter hunt and sort
Next Post:quick trick: the days of the week with vitamin C!