Cora and I have been rockin’ the bingo games lately, with a new spin on bingo games that she really seems to love. 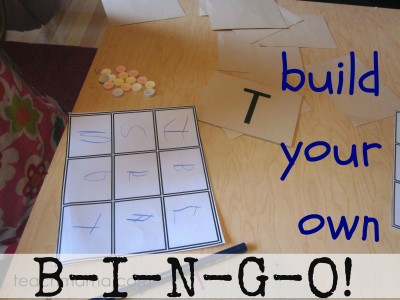 And I’m sure the Smartie bingo markers don’t hurt. . .

But after noticing that my tiny one seems to have the uppercase letters of the alphabet down pat, I have been keeping a closer eye on her knowledge of lowercase letters. Nothing formal, stressful, or official–just all casual and sneaky behind the scenes kinda stuff.

Of course, because we’re huge fans of names over here, I thought that there’d be no better place to begin than with Cora’s name.

Which, to me, is sototallyawesome. 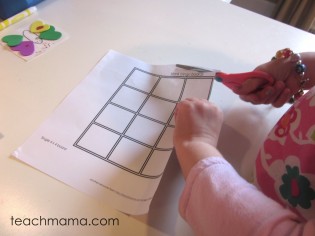 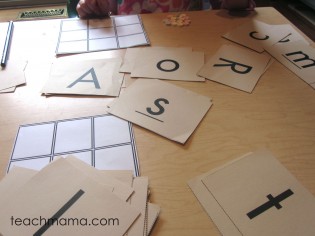 We used the 3 x 3 boards for this game, since I wanted to make it simple and I wanted to concentrate on letters that were special to Cora–the letters of her name.

So I grabbed our Alphabet Letter Cards, and I asked Cora to grab two packs of Smarties and meet me in our craft room.  (Lucky for me, she did.)  We separated the cards into uppercase and lowercase letter piles. 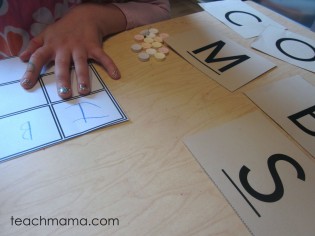 I said, Okay, my friend, we’re going to play a very special bingo game today–a game that is all about you.  And we’re going to make our own totally special boards in just a minute. But first we have to find some important cards in this pile.  We need to find the uppercase C, O, R, and A and the lowercase letters to match.  Let’s go.

We have nine boxes here on our board, so we need nine letters.  Let’s count how many we have so far.  We counted and we had seven letters.  We need two more letters so think of two of your friends and we’ll find their letter in our alphabet cards.

Cora immediately named two of her best buddies from preschool, and we talked about their names and the sounds–and letters–that begin their names. We added the letters to our pile and then I said, Okay, so I’m going to put all of the lowercase letters in one pile, and I’m going to put the uppercase letters in two rows.  And we’ll both grab a pencil and write one of these uppercase letters in any of the boxes in our bingo board that we want. You might choose to put the ‘C’ in this box (I pointed to the upper righthand box), and I might choose to put the ‘C’ in the middle box on my board. It doesn’t matter.  Okay? 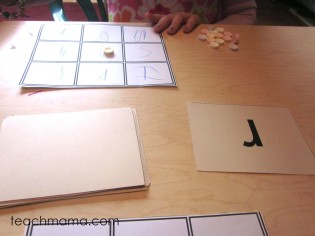 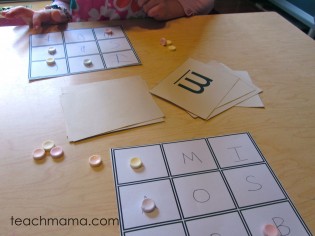 Cora shows me where she needs to go for a w-i-n!

She had already begun writing, and soon we both had full boards. 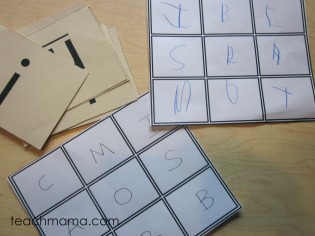 Now, let’s unwrap our Smarties and put them on the table. These are going to be our sweet, sweet bingo markers.  We can take turns flipping the lowercase letter cards, and then we cover the uppercase letter that matches with a Smartie. And the winner is the person who has bingo–three in a row–first. How fun is that? It’s a Cora and friends bingo!

We ate the Smarties after each win–so we played about four games until the treats were gone.

We took turns flipping lowercase cards, and after the first few cards, I really tried to let Cora identify the letters.  And she was fine. It was fun–easy, simple, and focused. And they were her letters–so she liked writing them and she liked reading them.

Next time, we’ll switch it up–we’ll play with family names, or maybe we’ll write lowercase letters that we used for this game and we’ll flip the uppercase letters. Oh, the options!

Goodness knows how I love to play with names over here when the learning has to be sneaky, meaningful, and fun! Happy bingo playing!