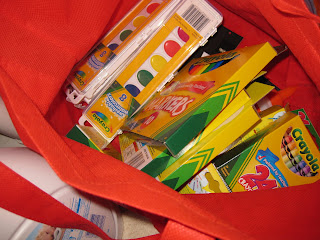 Put them to work. That’s right. Put your kids to work, and school-supply shopping is a lot more fun.

It’s that time of year again–school supplies have taken over every store we visit, teacher assignments have arrived, and my kids are getting nutty anticipating a change of schedule around the corner.

So I decided this year not to fight the sometimes anxiety-producing new school year preparations and instead embrace it for the sneaky learning opportunity and exciting day it can be.

So when I realized in a mad panic last Thursday that we hadn’t picked up one single school supply for Maddy, Owen, or Cora, I (yes, first panicked), and then I hit the computer. I created a School Supply List for each person–not as snazzy as our Grocery Shopping Lists usually are–but these lists did the job nonetheless. 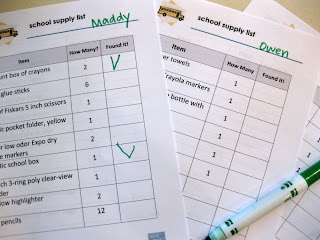 I knew we’d do the shopping on the following day, Friday, rather than battle the crowds on the weekend. And I knew that if I armed Maddy, Owen, and Cora each with their own list, a marker, and their own shopping bag at the store, they’d be more inclined to play my School Supply Shopping game and not run wild in the store or beg me for everything they saw.

So Friday morning, after we lazied around, read some books, and played with Brady, I called a mini-family meeting and explained what we were going to be doing:
Okay, my friends. School is right around the corner–only a few days away–so we need to do some major school-supply shopping in order to get you all prepared for the new year. Here I have one list for you, one marker, and one shopping bag. 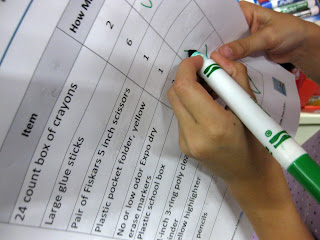 Today’s going to be our school-supply shopping day–we’re going to hit the stores, have lunch on the town, and not come back until all of these boxes are checked. Let’s read everyone’s list so we know what we’re looking for. . .

And really, that’s it. We first hit the park so that the kids could get some sun and hang out with their buddies. Then we hit the stores. And we stopped for lunch at Micky D’s. And we really had a blast, despite the fact that we ended up going to three stores and the whole thing took over four hours from start to finish.

Will I do it again this way? Absolutely. And I’ll certainly hit the park first, put my kids to work, go out for lunch, and call it a day. An overall really awesome day.

Even though Owen and Cora are not reading even close to as fluently as Maddy, giving them the lists was helpful for keeping them focused and excited about trying to figure out words and finding their items. They each only had about four or five items that they need, so my reading of the lists before we left the house gave them a head’s-up about what was on the list.

So even though Owen can’t read the word ‘paper towels’, he knew ‘paper towels’ was on the list, he knows that the word starts with a ‘p’ sound, so he knew where to put a check in the box after he found the word that began with ‘p’ on the list. Pretty darn cool. Early literacy never ceases to amaze me–especially on my own three kiddos.