With  three overly-tired kids and three pumpkins full of Halloween candy, I knew that I had to be extra creative if I wanted Maddy, Owen, and Cora to do anything other than moping around and asking to eat another piece of candy all day.

So I pulled out the teeny-tiny candy experiment sheets I picked up from one of my bloggy-mom idols who I had the awesome opportunity to meet just last weekend at the USA Science and Engineering Festival on the Mall in DC.  If you missed the Fest, no worries! 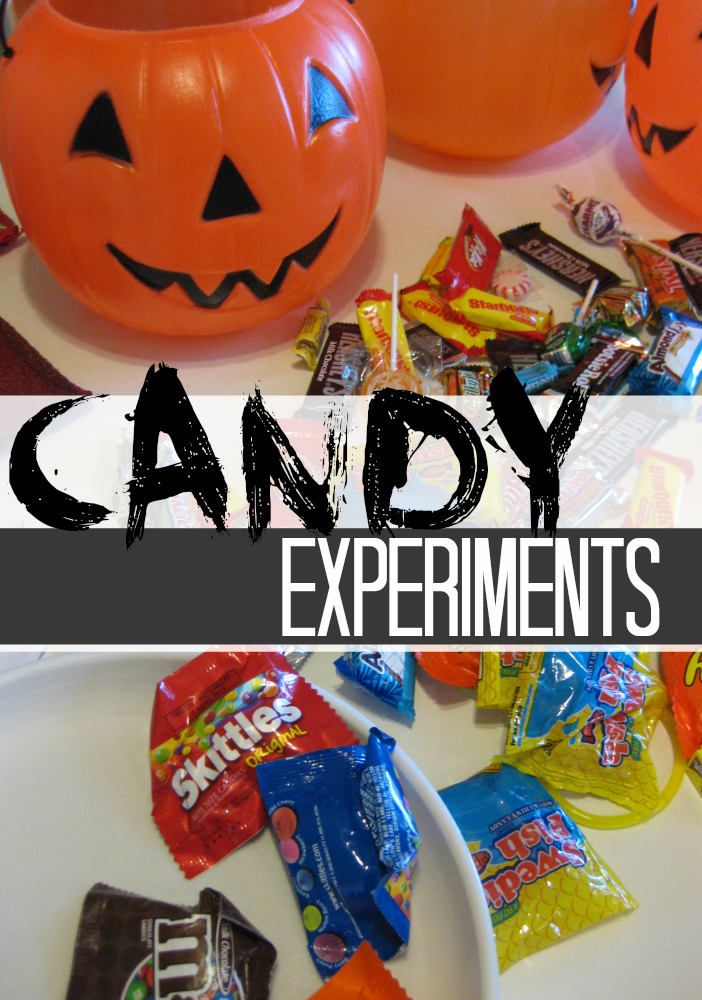 Super-cool Loralee Levitt has a handful of candy experiment sheets to download from her site, candyexperiments.com.  If you haven’t been over there, it’s worth checking out–and it will give you something fun to do with all that Halloween candy!

Here’s how we passed some time this morning, playing with candy in the kitchen–all in the name of science!

From the time they fell out of bed today, my three kiddos had candy on the brain–and why wouldn’t they? They gathered what seems like their weight in the sweet stuff, it’s a wonder they could lug it all back to our house. 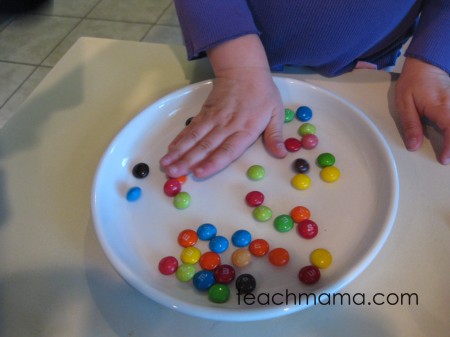 Cora gets the Skittles ready for their bath.

So when I said for the millionth time, No, you can’t eat any candy now, but you can play with candy in the kitchen if you want.  Let’s do some candy experimenting–they ran.  Fast.  To the kitchen.  Before I knew it, their chairs and stools were positioned, and three little scientists were ready. 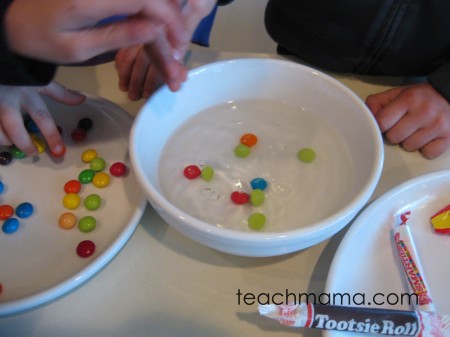 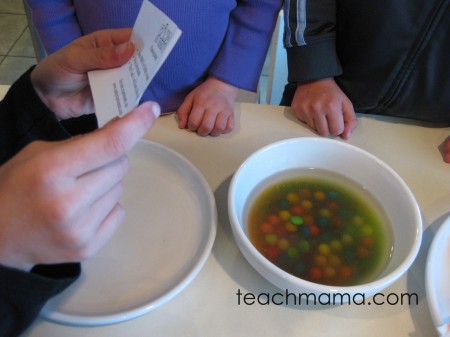 We began with the one I perceived to be the easiest: Floating Letters. This experiment is  super-simple; scientists simply submerge candy with lettering on them and watch to see if the letters float.

Maddy, Owen, and Cora searched for Skittles and M & M’s–candy we knew had letters–dumped them on a plate and then dumped them in some agua.

And then we waited.

And we watched all of the rainbow colors merge into one nasty, ugly-duckling Easter egg mix of green nasty.  Maddy re-read the directions to make sure we had done everything correctly, and then we waited a bit more. 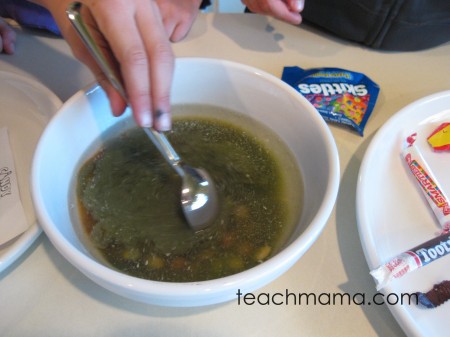 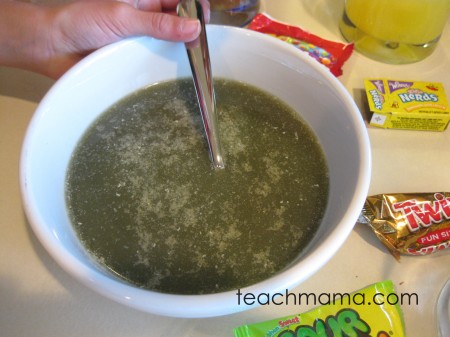 . . . and while she read, the letters appeared!

And then all of a sudden, after a little stirring, we noticed these teeny white flecks appear on the top of the water–the letters were floating!

We didn’t talk much about why they floated and that’s okay in my book, but we talked about what kinds of things float–lighter vs heavier–so we figured that whatever material made the letters on candy was lighter than the stuff that colored the candy.   Cool. 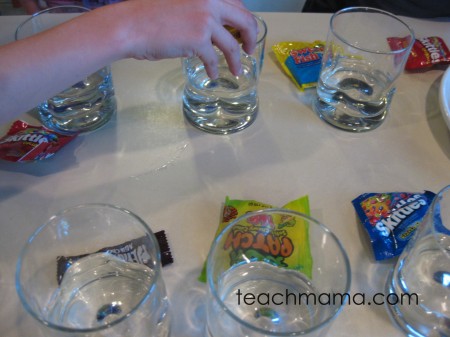 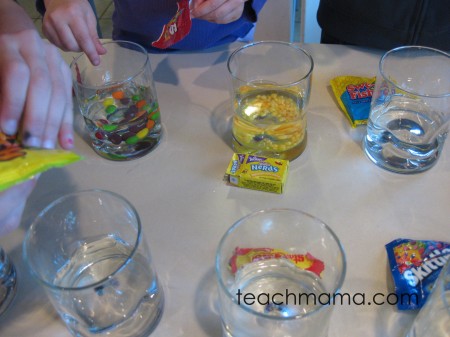 The second experiment we conducted was the Acid test.  This one wasn’t a huge hit for us, but the playing with baking soda was a huge hit.

The Acid Test involves dropping baking soda into candy that has been dissolved in water, and if the water bubbles, then the candy contains acid.

I filled eight glasses with water, and we picked out eight different candies–sour Skittles, Sour Patch Kits, Hershey’s chocolate, Tootsie Roll, regular Skittles, Nerds, Swedish Fish, and a Twix– to try.  Maddy, Owen, and Cora each poured candy into the glasses, and then they took turns adding baking soda to ‘their’ candies.

To be honest, we didn’t notice a huge difference with the sour candies or the Nerds (which are more acidic than the others), but it didn’t matter. Just for kicks I let the kids spoon some vinegar into each glass to watch it bubble, so that was cool for them. 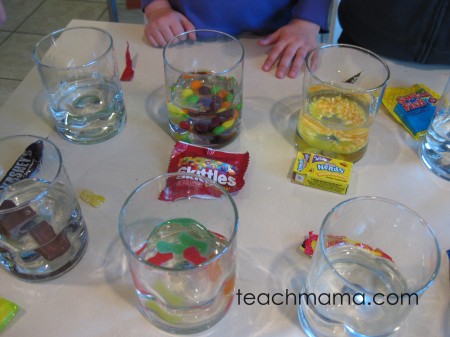 Our Acid Test was ready to go! 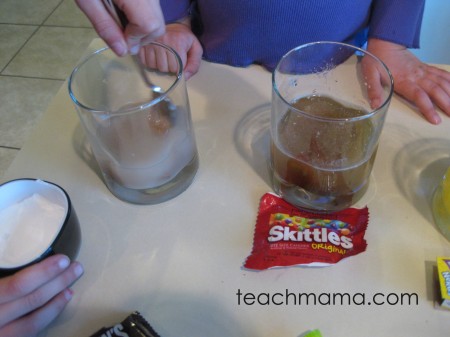 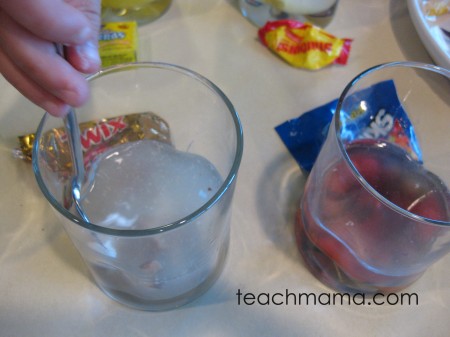 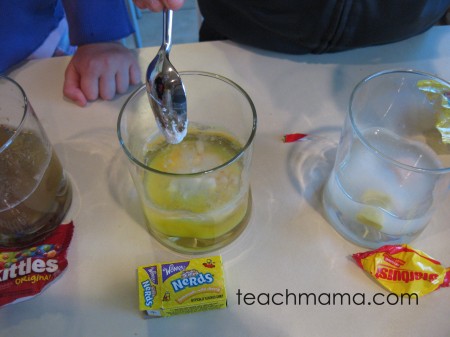 We talked a little about acid and how certain foods are more acidic–like oranges or lemons–and how they taste and feel different than other foods.  I asked what kinds of candy we eat that makes our mouths want to pucker like when we taste lemons? And that’s as deep as we got into acids vs. bases.

Maddy, Owen, and Cora really loved making the bubbles in the glasses, mixing up the candy, and really just playing with candy in the kitchen, but this is only the half of our fun.

They even more seemed to enjoy pulling out their Monet skills when it came to candy and creating mini masterpieces.  But I’ll share that piece tomorrow.

Until then, many, many thanks to Loralee for her fab work at candyexperiments.com and for sharing her science expertise in many parent-centered publications.  We only took our experiments so far–really there’s a ton more that parents and teachers can do with this if they want to.  More specific counting, color sorting, prediction and hypothesis creating, chart-making, observation-recording, and result-graphing would take this candy fun to the next level.

And it’s worth exploring.