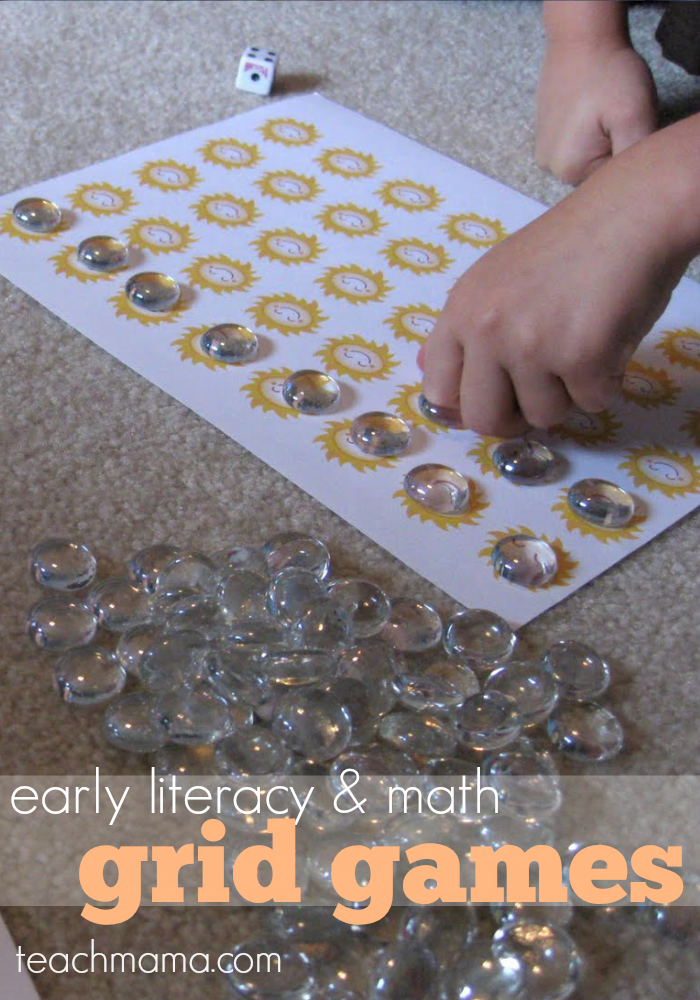 Today, on this rainy, cool, gray Monday, we rocked it with an oldie but goodie:Sunny-Rainy Grid Games. Or Rainy-Sunny Grid Games, depending on how you’re feeling or the weather outside.

We’ve played this game before, but not for a while, and last time we did, Maddy, Owen, and I played; today, Owen, Cora, and I played.

We were feeling tired and lazy after lunch and before rest time, so we plopped onto Owen’s floor, pulled out our Rainy Boards, and got counting. 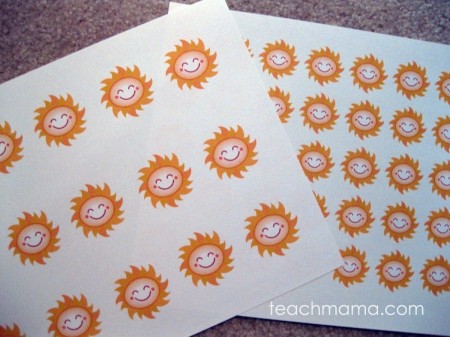 Cora, on the other hand, is the queen of independent play. She could easily trump Maddy and Owen in time spent alone, playing with dolls, cars, or stuffed animals, so it takes more of an effort for me to ‘reel her in’ and get her interested in the games and activities that Maddy and Owen would drop almost anything to play.

I grabbed our sunny rainy grid games, which can be downloaded as a pdf here. It’s now one document with four boards: Easy Rainy, Tough Rainy, Easy Sunny, and Tough Sunny.

I also chose to use the shiny ‘jewels’ that Cora loves to play with, hoping that they might entice her to join in our game. You can use any markers you’d like–Foamies, Cheerios, stickers, M & M’s, or you could have your little one practice making X’s or O’s. 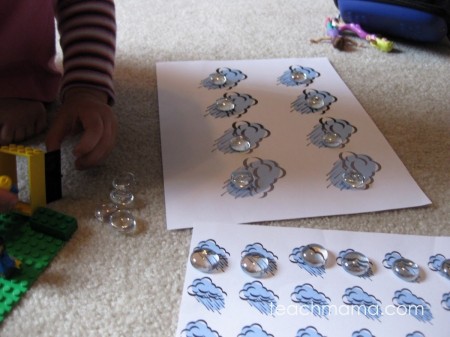 I said, Cora and Owen, it’s a super day for Rainy Grid Games because it’s just so rainy outside. Let’s take a minute to do some counting and see who can fill their board first! We can use these beautiful glass beads to keep count for us.

With all grid games, the goal is to be the first person to have all of the pictures on the board covered with markers. Players do this by rolling dice, counting the number of dots on the side, and then covering that number of objects on their board. Objects have to be covered from left to right, top to bottom, just like the left-right return sweep in reading.

Cora played with the Easy Rainy board, and Owen and I used a Tough Rainy board. Cora dumped and re-played her board three times before Owen beat me by one, covering his board first. She was only somewhat into it; it took a lot of cheerleading on my part to be more interesting than her Lego guys. 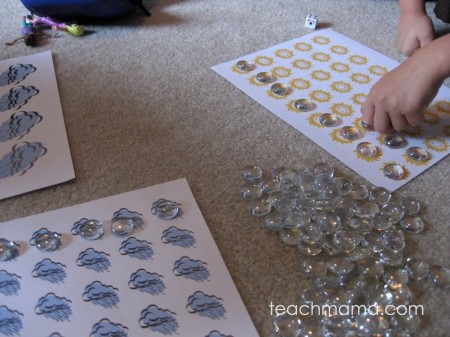 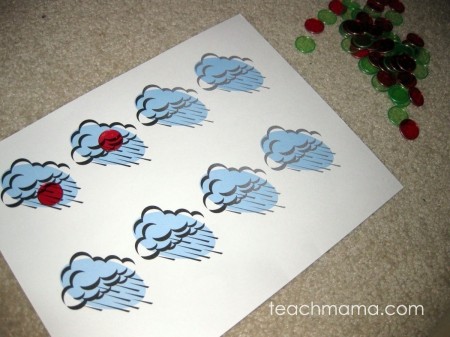 Hmmmmm. Just when I thought I had things down, my number three throws me for a curve in every which way. I’ll be reaching for all new things to get this little one rolling with us this summer, I can see it now. . .

I’m trying really hard to look back into our game boxes for some activities that will benefit–and interest–Cora, since she is ready to start taking some bigger steps into school readiness. I anticipate having to re-vamp what I have and searching for and creating different ways of getting her moving. What better reason to keep reading and researching on my part!? Give me a hand, my smart friends!

And just a re-posted fyi on why we love grid games:

Grid games as I’ve said before, are a super tool for teaching one-to-one correspondence which emergent readers need to understand that every single number and letter is important and that a group of letters is makes one word. Grid games also work on emphasizing the movement of left to right on a page and the return sweep–reading one whole line from start to finish before moving to the line below.

Math-wise, grid games work on counting–whether it’s dots on a die or a number on a card–and then translating that number to a specific amount on a page, or the number of objects that are covered by a game piece.

(And that’s why I’ll keep trying grid games now and again with my tiniest one!)

Want to throw in a Grid Game now and again? Here are just a few. Read on if you really want to know why Grid Games deserve some love: