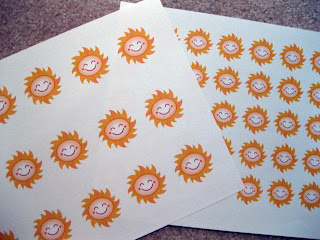 Maddy asked me a few days ago if we could play more of those “bunny counting games” that we played a while back.

I said, Absolutely! and ran for the computer. I’m such a slave to my children’s learning (how could I not be excited when this stuff is so easy and fun?)

What Maddy meant was that she wanted to play grid games, and what she doesn’t know is that these games are super-awesome for teaching emergent readers about one-to-one correspondence and early math skills!

So, we’ve been trying to make our rainy afternoons a little more bright by playing some good ole-fashioned grid games:

For grid games, all you need is the board, a die (or dice), and place markers. We used bingo chips this time, but in the past, we’ve used Foamies, stickers, Cheerios–you need a large quantity of anything small. Or, if you want to print off a few copies of the boards, you can have your little one work on writing, too, by drawing circles, squares, triangles, check marks, or x’s over each item. 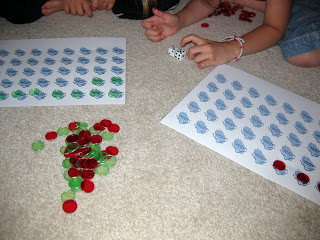 Maddy and Owen on the more tricky rainy board. . .

The goal is to be the first person to have all of the pictures on the board covered. Players do this by rolling the dice, counting the number of dots on each die, and then covering that number of objects on the board. The objects have to be covered from left to right, top to bottom, the way words are read on a page, so that kiddos get in the habit of following the left-to-right return sweep. 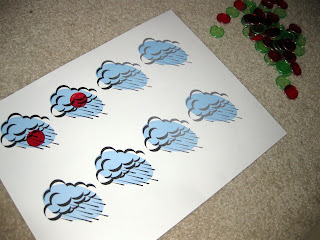 Really, that’s all there is to grid games! Maddy and Owen were on a grid game kick for a few days, and even Cora got into the mix (though, at 2 years old, she really just likes to put bingo chips over each object); she’s just not ready for rolling the dice, counting the dots, and then placing them accordingly. And that’s fine with me.

I know I said this before, but here’s why grid games are so cool: Beginning readers need to understand that each letter has its own sound and each group of letters together is a word. They also need to know that they begin reading the words–one by one–from the left side of the page to the right. Sounds pretty basic, but it’s something that needs to be taught.

And what better way to teach it than by playing a game? Here’s to grid games!