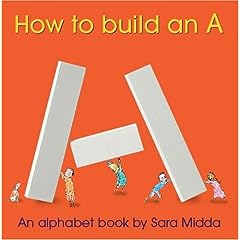 We broke open a new toy today, one given to us for Christmas, and it is a definite keeper. It’s simple, well-made, and I wish, wish, wish that I would have thought of it first. Hooray for you, Sara Midda!

Maddy and Owen took turns making each letter, using the book as a reference and helping each other along the way. The book was out all day long, and although Cora did bite on one of the blocks (two year molars on their way, maybe?), they seem like they’ll hold up through wear and tear of our house. It’s a really cool concept, and the blocks will (hopefully) stay together in the handy net bag that came with the set.

Later in the day, I found Owen relaxing on the living room floor, just building letters by himself. How awesome is that?

Any way that children can learn to create the letters of the alphabet is worth exploring, but a method where children actually physically create letters can be much more beneficial than completing pages in a workbook or playing a game on the computer–especially for our kinesthetic learners, or those who learn by doing. Also, this way children are forced to recognize the similarities in letters–how the E resembles the F, the F the T, the T, the I, etc. If you don’t have this cool set, it might also be done using Play-doh, strips of paper, Wikki Stix, and even some sets of building blocks.

And there’s just a glimpse into our learning for today–