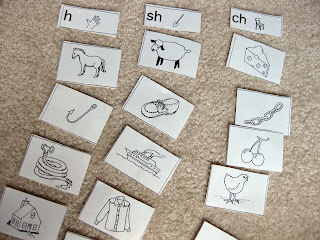 I had Owen all to myself this afternoon while Maddy played at a friend’s house and Cora took her nap.

I gave him the choice of playing anything from our Big Blue Box (my fun box of learning games and tutoring activities), and he chose Alphabet Spin I. We played a round with Ike, one of his Matchbox cars and then Ike’s big brother joined us for a second round of Alphabet Spin II. Always exciting around here. . .

Then I pulled out a sort that I hoped would help him distinguish some beginning sounds he’s had difficulty with for a while now: h-, sh-, and ch-.

I picked up the “horse” picture and said, “Hhhhhh-horse. Horse. Horse, hand. Horse, shirt. Horse, chair. Horse has the same beginning sound as ‘hand’, so I’ll put the card in this column.

Next, I picked up the “cheese” picture card and did the same thing: Ch-ch-cheese. Cheese, hand. Hmmmm. They don’t have the same beginning sound. Cheese, shirt. No. Cheese, chair. There it is. Cheese and chair both begin with the “ch” sound. 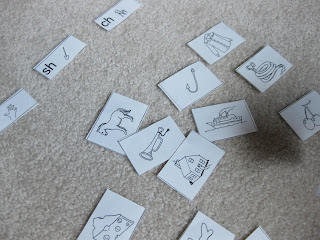 He has done a bunch of sorts with me before, so he knows the drill and instead of letting me model the first time, he grabbed a picture and practiced it on his own. He grabbed “shoe” and knew it didn’t fit under “hand” but really went back and forth between “cheese” and “shirt”.

He has a hard time distinguishing some digraphs (ch-, sh-, th-, etc) and blends (some s- and r-blends), when he speaks, as many young ones do, but I had been wondering if he was even able to hear the differences between these sometimes tricky digraphs; his confusion here and throughout the game makes me wonder.

Together we worked out the three groups, but when we do the sort again tomorrow, I’ll add a “?” column for the words he gets stuck on. Then, after he tries it the first time on his own, we’ll work out the confusing ones together. Practice, practice, practice!

Surprisingly, I also found these cool activities to try that also help learners distinguish between the h-, sh-, and ch- sounds (and other digraphs) while I searched for some extension activities today.

And that was Owen’s bit of learning today. We’ll revisit the sort again tomorrow if he’s up for it, and it will be something we’ll try to sneak in a bit more in the next few weeks. Maybe over time we’ll see some ch-, ch-, ch-, ch-anges in his digraph sorting. (Come ON, I had to. . .)

Today’s sort is from: